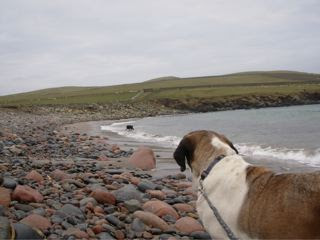 Nigella (and that's Lucy the St Bernard, not Nigella. She's watching Quoyle the labrador have his annual dip) loomed large over our Christmas foodstuffing. Several recipes were downloaded and printed out, and there were parsnips, there was goosefat (frozen since last year's goose, in fact) and other such delights (including pomegranate cous-cous).
Bed, eventually, after the hilarious crashing noises involved in trying to put together a full drumkit in Martha's specially-cleared bedroom while she pretended to be asleep. Susan handled the rest of the Santactivity, which I thought was only fair. As I write, on Boxing Night, Martha has progressed further in drumming technique than I have in 40 years of hanging around with percussionistas, lugging their drums up dale and down hill and soundchecking their tom-toms and snares while they avail themselves of backstage hospitality. Boom-chicka-boom-boom-chicka, and if you will, boom.
Amazingly, everything worked - James's computer, Magnus's iPod, Martha's drumkit. Susan and I were delighted with our various presents (By a sheer fluke, I got Susan a restored treadle-driven Singer sewing machine complete with every single 80-year old extra, up to and including an instruction manual). The food was great. The afternoon was a riot of music-making, thanks to the arrival of Hazel, her mum Winnie, her aunt Lilian and Hazel's Uncle Dwight, from Burma via Manchester. Dwight turned out to be not just a doctor and an inveterate collector of guitars, but a master of the piano, the mandolin and guitar. So some post-prandial rockin' and rollin' ensued.
After that, it was time to slump before a recording of The Hogfather Part One, the stunning film version of Terry Pratchett's book. We've just watched Part Two, and frankly I think it's the best new-for-Christmas show I've seen in decades. It was truly magical. No excuse, apart from general coma, for watching the Vicar of Dibley. It was pants. Shame on you, BBC. And let's not even mention the disgraceful Jam and Jerusalem Christmas 'Special'. Rushmore popped up on Five, completing my Wes Anderson experience - it was awesome - never seen it before. And great to hear a real Scots accent in a Hollywood film, courtesy of Stephen McCole. Who would believe he was Moose Heidegger in Band of Brothers?
Anyway, managed to go groggily for a walk today. Loads of seals popping their heads out of the water at The West Ayre. The weather is peculiarly mild. In fact, it would be mild for June.I fear a foul February!
To the cold turkey! Oh, and that creepy large yellow monster on the beach is, believe it or not, hundreds of fathoms of rope, probably dumped deliberately from a fishing boat. 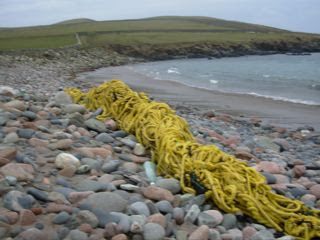 Actually your beach looks comparatively, in fact very clean compared to down here! ( your old stamping ground)I found your blog yonks ago and pop in now and again.

As soon as I started reading I thought to myself this bloke is writing in the style of Tom Morton on the radio(I did not know you blogged at that time)and my goodness it was!!

Weird but you sound the same in print as you do on the radio! If that makes any kind of sense. Love the blog and the radio show.

Cheers! We should count ourselves lucky with our beaches, I suppose - there's one at Heylor where you can still see the residues of bunker oil from torpedoed wartime convoys.

I see you ended up in the herald diary today over the sewing machine!