Back to Lerwick on Saturday, and the Johnsmas Foy continuing to pull in the punters. Here we have a scene more familiar from Up Helly Aa, with a couple of guisers, dressed up as...who knows? From what I overheard, they weren't sure either. 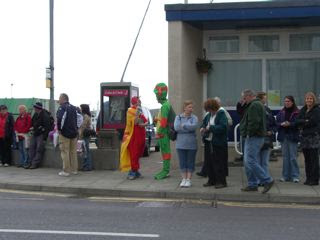 And then north, north and north again, to the glory that is Fethaland, the abandoned haaf-fishing station at the northernmost tip of North Roe. There, local folk had organised a wonderfully remote foy, with music, stunning food (mackerel, scallops, herring, steaks etc, all fresh) and even a bar - that's it in the stock trailer. It was quite, quite magnificent. There was even a Gaelic TV crew, making a documentary about the history of fishing. When I expressed some doubt about the availability of Gaels locally, I was cheerfully informed that two Gaelic speakers had just materialised at Fethaland, which is about as far away from the Gaedhealtacht as you can get and still be in Scotland.
Even stranger, the cameraman was Douglas Campbell, who worked on the Voyager film for BBC Scotland which took me to Shetland in the first place, 23 years ago. 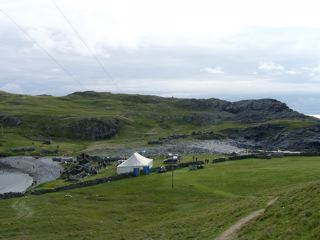 One of the most atmospheric spots in the known universe is at Fethaland. It's an ancient steatite, or soapstone, quarry, where you can see the ringmarks left from the carving of viking soapstone bowls. And the initials of dozens of fishermen, long-dead, carved during the summers they spent living here in the 19th Century, sailing and rowing their open sixareens 40 miles out to sea. The 1881 disaster, when 58 Shetland fishermen were killed in a single day's storm, saw one Fethaland boat crew of seven lost. It was the beginning of the end for the fishery known as the far haaf. 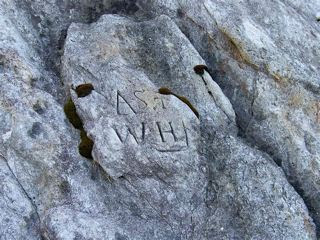 And so to the bar. Possibly the best bar in the whole damn world. There was only one appropriate beer for the location and the occasion. Can you guess what it is? Ah, the red tin, AKA The Shetland Rose...who needs real ale? Or, for that matter, lager? 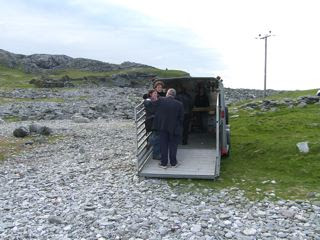 To Tom Morton--home on Long Island, New York, from my June travels to Shetland this summer, I was just surfing around, to see if any photos posted from Da Bannock, which I missed, of course, when I came upon your blog and was delighted to note the photo at the Fethaland Foy, of my son and myself, with, I forget the name of man we were talking to, at the "best bar in the whole damn world." What fun! We were nearly two weeks on the mainland, and the trip north, the highlight. My mother, 88 years old, is just now going online to find your blog and see her family in the neighborhood of her grandparents' birthplaces.... North Roe and Whiteness. It gives us a kick....thanks, from the states,and hope to return next year, same time, Carol McGorry