Blues falling down like rain in the St Magnus Bay Hotel... 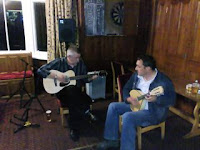 ...Jimmy Carlyle, local bluesologist, had advised me to check out Al Hughes, singer with the Fife blues and soul band Lights Out By Nine, as he was playing on Friday night at our local howff, the St Magnus Bay Hotel, now restored to full functioning order in the capable hands of Andrea and Paul.

So off I went with James Patrick, to be joined later by Susan, and, as the bar filled up with a host of local folk, it all turned into one of those hilariously entertaining nights you get, just occasionally, and only ever in Northmavine.

I fear Al - excellent set, always good to hear the Leo Kottke influence, and he has some really fine original songs - may not have been prepared for what happened when he thought he'd finished playing for the night. But he took the hijacking of guitar and moothie in good part and provided some mean Eagles covers. I had to stumble back to the house to fetch a mandolin. Not for me, you understand; there was a proper mandolinist present. As my brain had been swiftly liquified, my own attempts at singing had to be hurriedly abandoned.

Still it was a memorable night. I recommend Al's album, by the way, which is called Heart and Soul.
Posted by Tom Morton at 10:56 pm