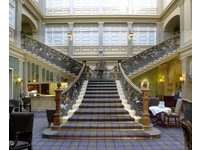 It's now the Royal Highland Hotel, and alas, not what it once was. For years, I would choose to stay the The Station because I loved the fading grandeur of its foyer, which was full of nooks and crannies , ancient paintings, gigantic, untended plants and lumpy sofas. It also provided a truly splendid breakfast, with the best porridge in the country. The eccentric, very aged South African barman, allegedly a former head steward on the Queen Mary, added to the general vibe.

You could get absurdly cheap room rates, too, due to an arcane hangover from its days as a railway hotel: bona fide 'highlands and islands residents' were granted a very cheap tariff, though I always suspected the worst rooms were provided in exchange. Never mind, I liked the ancient aroma of old steam trains too.

Now that absurdly grand foyer has been ruthlessly, tastelessly upgraded, the art has vanished, the shrubbery pruned. The adjoining bar has been converted into something called Ash, and the breakfast is one of the worst I've experienced in any Scottish hotel. Watery porridge, very strange scrambled eggs, greasy bacon. Worn towels, a dodgy shower BUT, it does provide free unlimited wifi.

Nostalgia ain't what it used to be.
Posted by Tom Morton at 11:21 am