Dylan in the Playhouse, the Bum-Clocks outside... 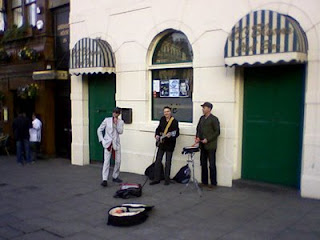 It was slightly disconcerting to arrive outside the Playhouse and find one Malcolm Ross, ex-Orange Juice, ex-Josef K, ex-Aztec Camera and possibly the most influential Scottish guitarist ever, busking on the pavement with his fellow Bum-clocks, including the irrepressible Tam Dean Burn on vocals and ex-Fire Engine Russell Burn on drums. Sounding great and funny, too. Check out their Myspace page at http://www.myspace.com.burnbrosross

On into the Playhouse, then, I think for the first time since going to see Hue and Cry in 1987...a strange vibe, Lindsay H said, and he was right: a mixture of fear that 50 quid had been spent on a gig which, by all accounts could end up being a train wreck, and anticipation. In the end, it's about being in the same room as a legend. And one who changed many of the lives present.

Symbolically, I was in the bar when Dylan came on stage. Leopard Skin Pill Box Hat, and contrary to rumour, recognisably sung. Word from those who had seen other dates on the tour was that tonight was easily the best. While Dylan's voice is shot, and the phrasing sometimes eccentric, there was real feeling in his treatment of Trying To Get To Heaven Before They Close The Door and passion in Like a Rolling Stone. Highway 61 and the recent Thunder on the Mountain (from Modern Times)were superb.

However, his insistence on playing loud, loopy lead guitar on certain songs was hard to bear, particularly with the presence of two wonderful guitarists in his cracking band. All of whom played brilliantly throughout, often having to cover for their wandering leader (his organ playing was a fair stab at Al Kooper, but often plain ridiculous; his moothie blowing is awful these days).

Not a word was spoken in the near two hour (with encores) set.Dylan looked natty in riverboat gambler garb. The reinvention of Blowing in the Wind as a barely recognisable chugalong and a peculiar Tangled Up In Blue was bearable, and in a curious way endearing.

In the end, it was about being there and hearing the man perform ('sing' may not be quite the right word)some of the greatest songs ever written. You can't put a price on the goosebumps-and-tears reaction I had to the chorus of Like a Rolling Stone. Well, you can. It was 50 quid a ticket. And just about worth it.
Posted by Tom Morton at 11:40 pm

Glad you liked us Tom and thanks for the mention and deserved praise for oor guitarist Malky. Howsaboot helping get us up tae busk and play in the Shetlands?!
Tam Dean Burn

glad the 50 quid was not a waste and a very balanced piece of writing, I probably would have opted for the free show outside after my last outing with Bob but happy you enjoyed the experience

Fair review Tom - I'd hate to have seen him on one his bad nights. Yes it was about seeing a legend but he needs to keep away from certain songs on the back catalogue. Just about worth the 8 hours of driving and the 50 quid, but I went away with the feeling of having been slightly fleeced. What was that Woody Guthrie line? "Some will rob you with a six-gun and some with a fountain pen." hmmm, maybe change gun to string, that feels more appropriate for me! All the best.

Tom - the fact that he did not play Thunder On The Mountain and yet you thought you enjoyed it is interesting. One of my favourite Dylan songs is Every Grain Of Sand, in fact possibly my favourite except with Dylan that is never a constant, anyway I had not realised he had played it until compiling / checking the playlist! So....you may be right, others may be wrong!

Leaving the venue I heard a conversation that went like...

With Dylan gigs these days, no one goes to hear him sing the songs as he recorded them. Everyone knows his voice is shot, I'd imagine he knows it himself yet we all go to see him and see how he works around all his songs.

I suspect the reason this gig was the best received on this tour is down to the venue. That music isn't suited for vast exhibition halls, it needs a "snug" environment. I've seen Dylan twice now, both times in "small" theatres holding around 3000 people. I'd pay £50 to see him in that kind of venue again, I'd never pay to see him in the SECC/O2 or suchlike.

We lost sight of him completely in the band for at least a couple of numbers from where we were in SECC. Could only just see his hat. I agree with comments on whether or not he sang a particular song - some I didn't recognise until halfway through. I didn't feel fleeced, just a feeling of incompleteness about the whole event. There were other Glaswegian critics in the audience who were much less impressed.