Ferry in the snow, and the Invisible Source of All British Wealth 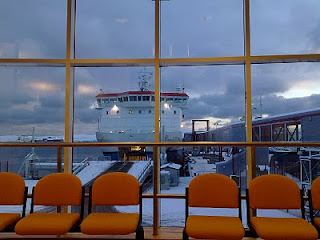 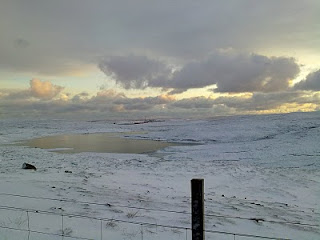 To Lerwick, early, on relatively clear roads, thanks to absolutely superb gritting and ploughing. And the fact that nothing like as much snow fell as expected. I'd arranged to collect Magnus from the ferry at the relatively civilised time of 9.00am, though it usually gets in at 7.30. Not today. Horrendous weather south of Orkney meant she didn't dock there until 2.00am, though time was made up in the (quite) calm seas between here and Kirkwall; she got into Lerwick around 8.00am. All times are approximate due to Magnus being sound asleep/oversleeping. Hence me waiting in the terminal buildng drinking lousy machine coffee.

It's now a gloriously sunny day, though we await further snow with interest. The second picture shows (though you have to look very, very carefully) the source of all the UK's oil wealth, the Sullom Voe oil and gas terminal. Due next year to see massive new investment from Total in a gas-fired power station. Couple that with the proposed new wind and wave farms, and Shetland could become Britain's oil, gas and electricity powerhouse. Shetland is also very pleasing aesthetically, as you can probably gather. Though being a tourist over the next few years could be tricky, as all hotels are likely to be full of Frenchmen in boiler suits.

You can see how much of a visual impact the terminal has...though I should point out that at this time of year, it gets dark at 3.00pm...so it's even less visible!
Posted by Tom Morton at 10:44 am