...meanwhile, back in Glasgow 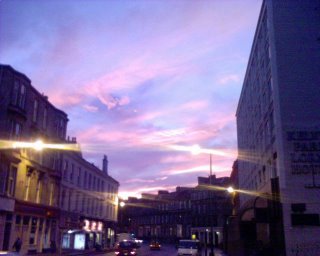 ...I took this just after daybreak during my last visit to Glasgow, a week ago. I'd just come out of my hotel (the Devoncove - cheap, cheerful and not very clean) on Sauchiehall Street, in my favourite part of the west end - where Kelvingrove Park interfaces with Finniston, along from Mother India. The camera phone I was using (a Sony Ericsson V600i, free with my last contract) just about captures, amazingly, the shocking bluey pinkness of the dawn.
Immediately afterwards, I took my hire car back to Arnold Clark, where a man called George informed me I would be charged an extra sixty quid because one front tyre was soft. Turned out there was a nail in it. Nothing would change his mind. Insurance doesn't cover punctures, it seems. Won't be using them again. A pity, as I've been using Arnold Clark in Vinicombe Street for nigh on...well. A long time.