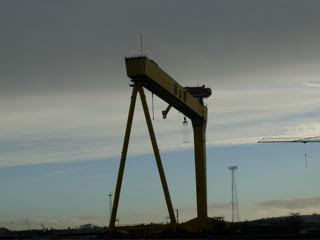 All kinds of problems loading pictures to this blog, so the best thing to do is click on the TITLE of this post, and you will be taken to my FLICKR page of Belfast pictures.

I'm back in Scotland (at the Speedbird Inn, Aberdeen Airport, which not only has free wifi but HDTV flatscreen tellies!)and I have to say that the trip to Belfast was a great experience...
First, I'd thoroughly recommend the City Sightseeing open-top bus tours. It's a tenner for an hour and quarter, but you can hop on and off as and when you wish, and this is like no other tour on earth. First, the guide on our bus was funnier than 90 per cent of all known standup comedians; secondly, it's a no-pussyfooting, political, sociological and historical voyage, taking in the poverty, the idiocy and the sheer strangeness of the Shankhill and the Falls, as well as the amazing transformation currently taking place in Belfast's fortunes.
This is a boom city, going crazy on construction and renovation, and, to be blunt, money and drink. It's like VE night every night. I thought I was used to hard public drinking (Shetland and Glasgow) but this is on a completely different scale. And I'm not just talking stag and hen parties (that's a market just beginning to take off, thanks to the 400-plus bars). It's a local phenomenon.
Having said that, Belfast is one of the friendliest cities on earth, the people are generally fantastic, and culturally, there's an enormous amount happening, as illustrated by the superb performances of Brian Houston and Duke Special on my show. The media, though, from newspapers to what I saw of local TV, appears to be in a timewarp, straining unsuccessfully to keep up with the speed of cultural, social, economic and political change. Though as you watch the posturing of the hidebound, tribal parties who will, I suppose 'power share' eventually at Stormont, you wonder what's keeping them in place. Traditional politicians seem to be regarded with increasing contempt and there's a sense that they may become irrelevant. Or maybe that's a hope.
the city is amazingly small. I had no idea the Falls and the Shankhill are barely a block apart. The way they mirror each other almost exactly, in terms of murals, memorials, insignia and flags, is weirdly Disneyesque. Who does those murals?
Those are some initial impressions. Maybe I'll come up with some more intelligent thoughts in the next couple of days. Meanwhile, do check out my Flickr pictures...
Posted by Tom Morton at 9:25 pm