Wednesday, and the post is still not back to normal, which means that for bizarre technological reasons I can't access my BBC email (I need a replacement electronic code-token-thingy, which has to be posted to my home address from London).
I really value our local postal service here in Shetland - especially over the past few weeks when I've been posting copies of Spirit of Adventure here, there and everywhere using our local PO. Same price to Plymouth as to Lerwick. And of course, the daily arrival of Andrew (or Peter at the moment) with letters and parcels is a rural highlight. Ebay has taken the place of the 'club book' for many Shetland folk - Andrew The Post told me that up to 70 per cent of his mailbag some days can be eBay related.
Anyway. It would be a tragedy for Shetland and other island communities if the postal service gave way to rampant courier company dominance...having said that, James ordered a new soundcard for his computer in the midst of the strike and it was couriered here within two days, at no extra charge. A loss leader, methinks. Once Royal Mail is broken up and sold off, and probably before, it's inevitable that some sort of distance and remoteness surcharge kicks in. Then life hereabouts will become even more marginal.
There are many good things about living in Shetland, though, and one of them is Burrastow House, 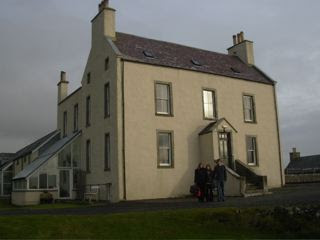 in the far west side of the Shetland Mainland. That was Susan's surprise birthday destination on Saturday, and with James and Martha we had a fine time as the only residents - delicious food, roaring fires, four poster beds and the sense that we were in a whole different country. Possibly Belgium, as that's where owner Pierre hails from. And whence he's heading this weekend, as he's closing Burrastow now until April next year.
Meanwhile, we were thrown into an agony of indecision this week when the owner of one of the late Lucy's puppies asked if we could possibly offer a home to said adolescent St Bernard. We are still pondering the possibility. If it wasn't for the arrival of Hamish and Neville the cats...who were at the vet yesterday having their male appendages removed. They seem none the worse. Maybe we should stick with Lulu, 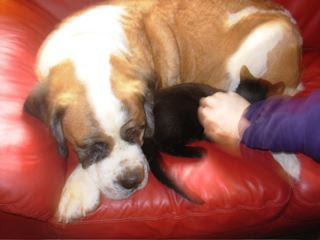 Quoyle and the feline mouse-killers, and count our blessings. Adolescent male St Bernards, bigger and bouncier than their female counterparts, can be, errr...somewhat bouncy. Lulu has just managed to dig (she likes to dig) a hole in our relatively new leather sofa. Maybe she's preparing to bury the cats in there...

Anyway, I'm off to Aberdeen tomorrow night to prepare for the show's Idlewild special on Friday, when the band play for the first hour to a small audience at the BBC Aberdeen toast-perfumed bistro. Should be good!
Posted by Tom Morton at 10:28 am