Attack of the mutant monster feral Kelvingrove squirrels (and a Dalek) 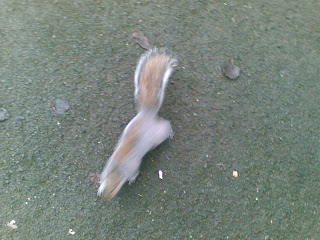 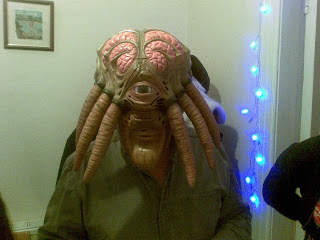 There we were, permabulating through Kelvingrove Park along with many other groggy ne'erday humans, when I was approached by a squirrel. A grey squirrel, the nasty interloping diseased creature which is in the process of wiping out our wondrous native red squirrel. Well, there's more than one, obviously. I'm talking species here. Or specieses.
Anyway, this thing sat like some cartoon character and obviously expected to be fed. I had no weapon, otherwise I would have done my bit for red squirreldom. Soon three more grey beasts approached. Someone, perhaps with a superficial resemblance to myself, regularly fed these evil creatures. When the boldest of the furry freaks tried to climb up my trouser leg (really) we left, hurriedly, pursued by equally tame but less obnoxious blue tits. I felt like Dr Doolittle.
Later, I met a real monster, a Dalek without its metal casing. But the squirrel was really terrifying.
Posted by Tom Morton at 10:02 pm