It floats! Launch of the good ship Cryptonomicon. Take that, Crown Estate Commissioners! 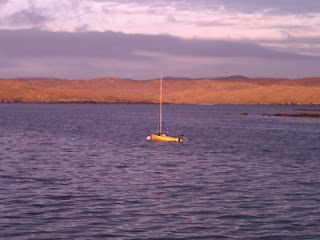 At last! The dinghy is in the water and appears to float! For no reason other than I love the book (and the word), she is called Cryptonomicon. An old Kestrel fibreglass sailing boat, complete with tattered sails and, my pride and joy, an original British Seagull 2-stroke engine (runs on an amazing 10-1 petrol-oil mix.

Bruce (Wilcock, Blacksmith, neighbour, anchorsmith, photographer and much else)gave me the makings of a mooring (float, chain, an actual anchor, not an old engine block as is usual in these here parts) and with the purchase of some absurdly cheap shackles from Da Malakoff (wondrous chandlery emporium in Lerwick) and some careful hacksawing, I had what I needed (twice high tide depth in chain).

But how to get the mooring out to the requisite spot? James (fresh from Advanced Higher Maths) took pity on my aching back and helped haul the dinghy down to the water, then pile anchor, chain and float on the little Bic Ouassou kayak. I then paddled Cryptonomicon out to sea, towing the loaded kayak. It took ages, especially as there was a light onshore wind. Stop, capsize the kayak, hope the chain doesn't tangle, and Davey Jones is well and truly your uncle.

I've lost a boat once before to a bad mooring (chain broke in a strong westerly. Looked out the window to see a Shetland Model and brand new Honda outboard heading into the Atlantic at speed. Fortunately, a local salmon farmer agreed to give chase and the recalcitrant vessel was recovered). I've moored Crypto using two separate ropes and giant carabiners straight onto the chain, so I'm hoping she'll be OK.

All that remained was to right the kayak, climb aboard and paddle to the beach, desperately seeking two Nurofen for my hopelessly wrenched back. So far, Crypto is still floating, the mooring is still solid. Mind you it's flat calm.

The Crown is supposed to own the seabed around the UK, and there's a notional charge for moorings, usually collected by harbour authorities. It can be quite steep on the west coast of SCotland. In Shetland, there's a general indifference to such things. Udal Law, a remnant from the islands' Norse past, probably (but then again, possibly not) dictates that the seabed is not Queen Lizzie's at all. Anyway, they'll have to come and demand seabed rental with menaces if they want it. This isn't the River Hamble!
Posted by Tom Morton at 11:43 pm