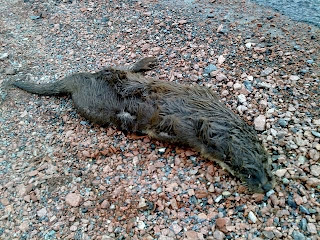 We had an inquiry this week from a prospective renter of our holiday cottage in Heylor, and, in the week that Simon King's book about his sojourn in Shetland comes out, they were excitedly asking about wildlife. 'Any otters?' Yes. A lot. Just be careful you don't have a closer encounter with one than you may have wished.
Posted by Tom Morton at 1:29 pm