The March edition of Shetland Life Magazine can be downloaded in full here for the cover price. 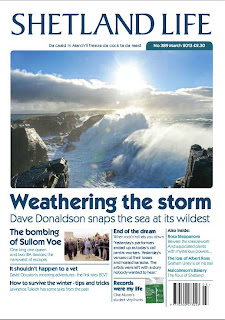 Here's a wee snippet from John Peterson's excellent piece about the only IRA bombing ever to take place on Scottish soil - the attack on the Sullom Voe oil terminal during the opening ceremony by Her Majesty the Queen.

At noon on Saturday 9 May 1981 Queen Elizabeth II, along with her husband Prince Philip, was in Shetland to attend the inauguration ceremony of the new oil terminal at Sullom Voe. The royal couple had recently arrived aboard the Royal Yacht Britannia and were joined at the ceremony by King Olav V of Norway who had sailed in aboard the Royal Yacht Norge.  Various other dignitaries had come to Shetland by a specially chartered P&O ship.

As the royal triumvirate stood listening to their respective national anthems and the Queen waited to deliver her inauguration speech to the assembled crowd, barely anyone noticed the distant sound of an explosion, just 500 yards away in the new terminal’s main power station. Those that did hear the noise suspected some kind of electrical fault, but it was only in the hours and days that followed that it became clear the blast had been caused by a concealed explosive device, planted with the apparent intention of assassinating the British Head of State.

The explosive device, which contained seven pounds of gelignite connected to a timed detonator, had been hidden high up in the power station building. When it exploded at around 12.05, a nearby boiler was damaged and a large amount of debris was scattered around the vicinity, but fortunately there were no casualties. Around the same time as the explosion the British press began receiving messages from the Provisional IRA, claiming responsibility for a bomb blast at Sullom Voe. Because details of the incident were contained to begin with, the IRA claims were initially dismissed by the media as a hoax. But then news gradually began to trickle through that there had been reports of some kind of unidentified explosion during the inauguration ceremony...