Tom Morton’s new BBC Radio Scotland programme “Morton Through Midnight” (Friday, Saturday, Sunday 10:00pm-1:00am) which started at the beginning of April, has already been inspiring the nation with its varied selection of music and features. In particular, glass artist and painter Alec Galloway set himself the challenge to listen to all three shows 26th, 27th, 28th April and create a painting purely inspired by what he heard on “Morton Through Midnight”.
The result was a collage of images inspired by certain records (Rolling Stones, Blondie, Rod Stewart, Television, Stevie Ray Vaughan, and Led Zepplin alongside Woodstock singer/songwriter Richie Havens and country legend George Jones who both died that week and who Tom paid tribute to.
Alec posted the “work in progress” on his Twitter feed, over the 3 days and as Tom played out his eclectic mix, Alec moved to a new part of the painting. He intends to donate the finished painting to the Nordorff Robbins Music Therapy charity to be auctioned off. 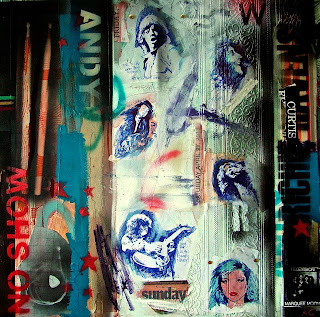 Radio fan Alec, says “The idea really came about as Tom's show seems to be the soundtrack to my work! When the daytime show was going I would always have it on in my  glass studio, and as it turns out, I also do a lot of my painting  in the evenings, so Tom's music is really part of my working process now, I couldn’t imagine it not being there!
I wanted to challenge myself to see if it would be possible to react to songs as they were being broadcast ,and I think it worked out well, albeit a bit mental at times!
I have a library of music books, so as soon as something caught my ear I’d scurry off and find images and start working on them!”

Presenter Tom Morton was delighted with the results and watched the process with interest. Tom says: "I've been an admirer of Alec's work for years, long before I knew he had provided the stained glass in some of my favourite drinking establishments. And he's become a regular correspondent due to the afternoon radio show and now Morton Through Midnight. I loved his work with Rory Gallagher's legendary guitar and when he suggested an interactive, Morton Through Midnight artwork based on the records we played, I was thrilled.
It's turned out brilliantly - as far as I know, the world's first interactive, real time late night radio rock'n'roll painting!"