Shetland Life: an editorial on helicopters 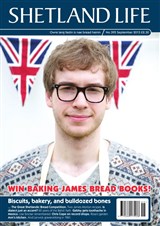 Helicopters have played an important role in Shetland’s modern history, from their crucial role in the exploration for and exploitation of North Sea oil and gas to the rescue of many from the sea and the evacuation of sick local folk to hospital.
They are, however, among the most unforgiving pieces of equipment used for transporting human beings, should any mechanical failure occur. And Shetland is fully aware of the consequences. The most recent, fatal incident involving a Eurocopter Super Puma AS332 L2 just off Garths Ness, which took the lives of four passengers, is a shocking reminder of how at the mercy of machinery we are.
It is impossible to pay sufficient tribute to those who moved with great speed, bravery and skill to save the 14 survivors, and then to recover the bodies of the victims. In what were difficult conditions, the rescue services carried out a hard and harrowing task
What went wrong? As I write, the Civil Aviation Authority's unprecedentedly quick hint that the problem was 'not technical' has brought the grounded fleet of Super Pumas back into service. However. The 2009 crash off Peterhead that killed 16 people involved the same model of helicopter, and two non-fatal ditchings last year were of EC225 Super Pumas. There are questions about the machine that need answered. The EC225 was banned from flying for 10 months and only recently came back into service. The confidence in all models of Super Pumas of those who work offshore has been shaken. And the results of investigations into the reasons for the EC225 ditchings are not encouraging. Experts found a whole range of gearbox problems, including manufacturing errors, corrosion and even basic design faults. All, it seems, now sorted.
It is impossible to ignore the economic pressures to get the majority of the British offshore helicopter fleet flying again. There are around 57,000 workers travelling to 600  installations each year, and capacity is tight, given the high level of activity in new developments such as Clair Ridge and activity west of Shetland. With aircraft grounded, workers were asked to take longer shifts offshore and supply boats were pressed into passenger service.  It wasn't 'economically workable'.
The bottom line is this: helicopters are necessary if offshore oil is to be exploitable. And yet, despite assurances and knowing hints, confidence in them is low.  It is not hard to imagine the dread oil and gas workers must feel at the thought of a flight to the rigs and platforms.
We have been here before, and in even more tragic circumstances. The 1986  crash off Sumburgh killed 45, making it the world’s worst ever helicopter incident. As a result the giant twin-rotor Boeing Model 234 Chinooks, capable of carrying almost twice a Super Puma’s payload, were taken out of service in the North Sea. History has proved that there was nothing wrong with the Chinook’s basic design. The CH47 military versions remain crucial to armed forces throughout the world, including the RAF. Columbia Helicopters in Oregon still use the 234 and its little brother, the twin-rotor 107, for passenger transportation and heavy lifting. There is said to be a much-upgraded Chinook in Afghanistan being flown by the grandson of the man who originally piloted it in Vietnam. Yes, there have been other disasters involving the machine, notably the controversial 1994 Mull of Kintyre crash which killed 29 people, and which was blamed on both pilot error and poor maintenance.
But that is not the reason Chinooks no longer fly in the UK offshore oil and gas industry.  It’s back to the unforgiving nature of helicopter technology: If anything goes wrong, the results are likely to be catastrophic, and a machine with nearly 50 people on board offered a level of fatalities which was simply unacceptable. More people died in the  Chinook disaster than in all the other eight fatal North Sea helicopter crashes. Public opinion, not technology or inherent safety, forced a change, and the decision was taken to move to  the Sikorskies and (mainly) Super Pumas now in service.
The switch to smaller helicopters was about reducing the numbers of potential casualties, but saw an inevitable increase in flights, and therefore the statistical risk of mechanical failure. But remember too that 14 people survived the most recent crash, and several Super Pumas have ditched without loss of life. Could a Chinook do that?
As offshore activity peaks, it is absolutely essential that every step is taken to minimise risks to workers. Complete confidence may never be restored in Super Pumas, and in the end, one fatality is too many. But the risk will always be there. Helicopters are unforgiving machines, and offshore oil is an unforgiving industry.