Dismaland, take two: in the daylight and inside the beast

It's a grey and blustery old Scottish day down here in the deep south west of England. Weston looks like Ayr, feels like Ayr. Hey, it's kind of Celtic. You can see Cardiff. 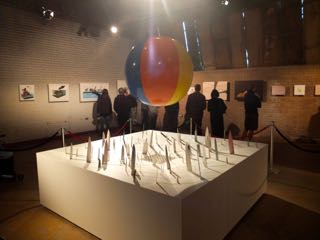 And Dismaland looks and feels different. The sinister, war-zone garishness has gone, and the lazy steel guitar soundtrack makes the crumbling seaside ambience feel less oppressive than it did last night. Not so sinister.

It takes a lot longer to get in, as there seem to be more people in the 'booked online' queue (and several hundred waiting on the off chance for returns) but once past the histrionic 'security'actors, everything seems more accessible. Or maybe my aged eyesight likes daylight better. I head for the three main inside galleries, and immediately Dismaland stops playing around and gets serious. 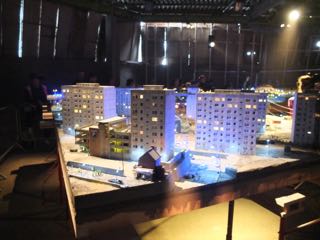 The huge Damien Hirst installation is accessible, intellectually impressive and visually appealing. Making the sinister glint and glitter is his speciality, and the (very expensive) knives here have a wicked shine and shimmer. And there are actual paintings, many very impressive and on a huge scale. I absolutely loved the photo-realist Lee Madgwick pictures and the Jimmy Cauty model world is an urban and rural dystopia in OO scale. All it lacks, and as a railroad freak I would have adored this, is a working model railway. Oh well.

The Cinderella/Diana/paparazzi installation is clever and disturbing, but the execution outruns the idea by several furlongs, so that you're ready to leave before your photo with the dead princess is ready. OK, got the notion, let's move on.

Elsewhere, some of last night's impressions are confirmed. Too much message-led conceptual art by numbers, too great a wallowing in smartass sarcasm. The scaffolding horse and the twisted mega-truck could fit in an unironic seaside attraction without difficulty. David Shrigley's knock-down-the-anvil sideshow lacked its essential balls, and too many of the other takes on fairground games were obvious and one-dimensional. 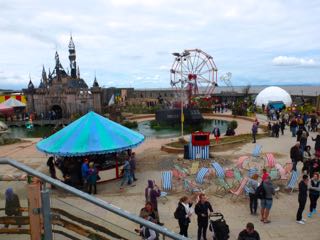 Worth going? Well, really I'm down here to see my sister, but as the major British art event of the year it was definitely worth a detour. Some of the more traditional, exhibited work is breathtaking and it's surely significant (he says, sounding like some kind of raving conservative) that the outstanding moments are the most highly evolved in terms of training and craft. The rest of you? Keep practising...
Posted by Tom Morton at 1:21 pm