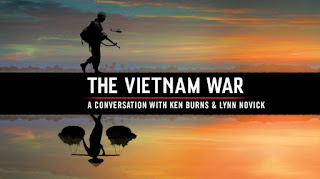 The Vietnam War was the first televised, image-mongering conflict, and visual portrayals of it possessed my TV-watching childhood and youth. Some remain imprinted not just on my memory, but on the watching world's: Eddie Adams' photograph of South Vietnamese police chief Gen. Nguyen Ngoc Loan killing a Viet Cong suspect; Nick Ut's astonishing, opinion-altering shot (and a BBC crew's film) of a napalm-burned child, Kim Phuc. many, many more.

It was a movie war, too: At least three classics - Apocalypse Now, The Deerhunter, Full Metal Jacket. And so Ken Burn's recent TV documentary series had a difficult job: to enliven and indeed remake those images in the minds of those who had seen them many times before. To find new ones. And to deal with the fact that it was also a war soundtracked by some of the best pop and rock music ever made, indeed, inspiring much of it.

It was the music that for me joined up the straight conflict reportage with the wider history of what was an incredibly turbulent time in world politics. Ken Burns used some of the best-known and lesser-remembered tracks of the time (with added original music from Nine Inch Nails' Trent Reznor) to weld together a masterful series which combined intensely moving interviews with participants from all sides with music, moving and still pictures. Brilliantly.

How powerful were these songs? How bleak and terrifying are the Stones on Gimme Shelter? How ragingly appalled John Fogerty on Fortunate Son? And contrast today's wearily cynical anthem from The Killers, The Man. It's a good song, smart; but it has no real anger, no social power. 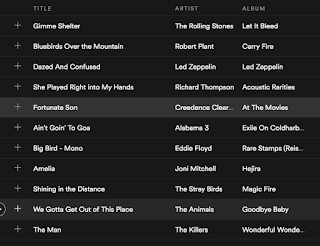