London calling to the faraway towns... 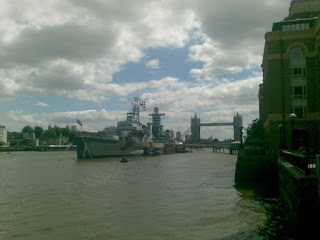 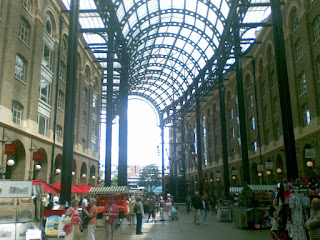 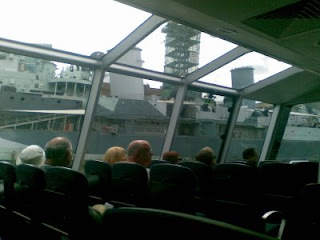 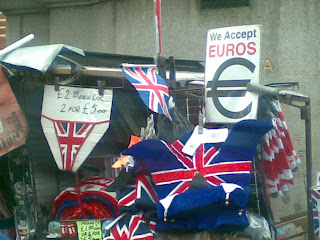 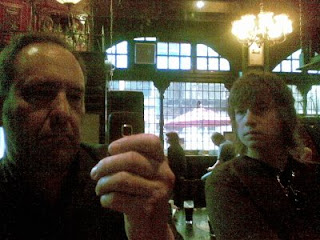 Six hours down the motorway, plus an hour's break, and we were at Susan's sister's house in Dunstable. I hired a gigantic Vauxhall Vectra SRI estate, which was big enough for all the wedding paraphernalia (Susan's nephew Neil is marrying Liz on Saturday)but felt, and I never thought I'd say this, slow and flimsy compared to the wee Citroen C4 diesel.
Yesterday, we took the train from Luton into London to do things I'd never done - go for a boat trip on the Thames and visit the Tower of London. Visiting the Tower was a result of re-reading Neil Stephenson's epic Baroque Trilogy, but proved a bit wearying and disappointing - not enough Mary Queen of Scots (in fact, not ANY Mary Queen of Scots) and the whole thing was rebuilt by the Victorians anyway. It's been a museum rather too long. Crown Jewels were very...glittery.
The South Bank has been beautifully sorted for riverside walking and, well, spending. Hay's Galeria is nice in a Princes Square sort of way (we had bagels there, among table-stalking pigeons).
The Thames Clipper service is more of a water bus than anything else, but impressive. Fast catamarans, and they all have BARS! We bought all-day tickets and I was tempted to just spend the day drinking and wobbling about on the surprisingly rough Thames (hey, come on, it's the holidays), but there was, ahem, shopping to do.
So James and I repaired to the Marlborough Head in North Audley Street for a libation while Susan and Martha Primarked in Oxford Street.
Terrible problems finding anywhere to eat in the evening - everywhere was solid - and the underground was a nightmare - hot, dirty, crammed and with enormous delays on the Central Line. It was a relief to escape back to Dunstable, though the rest of them have headed back into London today. I pleaded exhaustion and Open Golf Coverage.
Posted by Tom Morton at 12:30 pm

You must by now realise why you live where you live - London - uugh!

Have a great time at the wedding, I hope that the sun shines for the bride - it has poured with rain up here in the Scottish Borders for what seems like all week!

You are being missed in our office - my husband has been listening to Radio 2 this week, whilst I continued with the faith at home (being the school holidays).

Heard Vic saying (I think) that Gail Porter is doing your show next week, that will be interesting.

Look forward to hearing you back on the radio but in the meantime have a great holiday.

hey Tom,
i am missing the Tom Morton Show.
hope to catch up when i return on wednesday.
hope your summer is going well.

Fine, Tom. I finally made it to Shetland and what do I find? Morton has absconded on holiday! I suppose the clue was in hearing Sic Galloway doing the show last week. Anyway, how I came to be in Shetland. I work for a vehicle movement company, delivering or removing cars from leasees and I was asked to go to Shetland to deliver a Porsche! Sounds great, but the fly in the ointment was that I had to travel from Dumbarton to Aberdeen by train, taxi to a garage where the Porsche had been getting some health checks and then drive it to the ferry...... and then off the ferry and into Lerwick! I then flew back from Sumburgh to Glasgow. I was away for about 33 hours and got to drive the Porsche about.......... 3 miles! Still, I got to see some Shetland and who knows I might get back some time.