T in the Park, Amy W and back to Glasgow 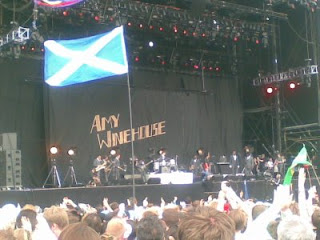 Three days at T, and now it's Monday and I'm back in Glasgow, wondering how my face got so burnt...Amy W turned up, barely spoke, sang relatively well and managed not to totter off her high heels. The rest of Sunday? Counting Crows were magnificently out of place. The Kings of Leon were, again, a complete mystery to me: Why do people think they're any good?It's like a scratchy, tuneless version of Skynyrd. Paul Heaton needs to learn his words, which seem, as ever, excellent. What was that Eddie Jordan thing all about? Does any multi-millionaire with a vanity pub band get to play at T? Though the way The Robbers were treated with studious contempt at their Hospitality gig may have taught him a lesson. Next minute, though, they're on the Pet Sounds stage. Bizarre.

Dreadful news about the death (natural causes, apparently) of a 32-year-old and the stabbing of someone else. Don't think I'd like to camp at T again (it's four years since I did so), and frankly, age was telling against me by the close of play yesterday; all I wanted was a quiet place to sit down and have...a cup of tea.

It seems obvious to me that the festival will eventually have to try and distance itself from Tennents. Surely the days of alcohol sponsorship on this level are numbered? I'd expect the Scottish Government to move on the issue within the next couple of years, and it was evident from this year's attempts to promote 'safe drinking' and the 'Healthy T' initiative that the organisers can see the writing on the wall. The wall-to-wall BBC coverage of what is at the moment a major promotional vehicle for booze, raises issues that Auntie will have to deal with too.

As for the toilets (Pee in the Park, indeed)...it's hard to see what else can be done. Female urinals? Women were using the men's troughs by mid-afternoon yesterday. Feminism or desperation?

Boozing will always be part of what has become a rite of passage for Scottish young folk, but the brutal commercialism of the Tennents presence sits uncomfortably with Scotland's new 'moderation message'. More changes next year, I suspect. How long does the Tennents sponsorship deal have to run?

Anyway, some real highlights: Alabama 3 tore King Tuts apart - Paolo was, I thought, stunningly good and the new material is fantastic. The aforementioned Counting Crows made an old muso very happy. Rage Against the Machine were enormously impressive, in a jaggy steamroller sort of way. Reverend and the Makers were the junior A3, but dear goodness, the Rev's voice is a bit wobbly. Hot smoked salmon pasta from Loch Fyne seafoods was exceptional. The Relentless bike stunt show was a treat. And the man with the ladder (£4 for three shots at climbing it without falling off, £20 if you succeeded) must have made enough to buy a house. Sometimes the simplest ideas are the best.

So that's why you're grateful for flushing toilets. I understand.
A friend of mine was in the Priory with Amy Winehouse - apparently in real life she is a very intelligent, engaging and pleasant girl, but seems to have the sort of entourage which you wouldn't like hanging around your local shops. As ever, getting out of a rut is a lot more difficult than getting into it!
Not all my friends are in rehab - some are mad but don't need treatment, the rest are mad but can't afford The Priory. Regards, Rupert B.

Cup of Tea in the Park...now that's more like it. Someone get Amy a couple of extra sugars and maybe an iced bun though eh?