If you see this bike, call the cops 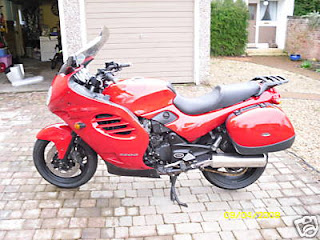 T697 RHC .Stolen from outside my son's west end of Glasgow flat overnight. Bought to take part in the charity ride described on the Journey's Blend blog. 28,000 miles, just resprayed in Alfa Romeo Rosso Red, in superb order, and almost certainly destined for the eBay parts bin. A real shame.

Thing is, I only moved it from safe parking at the BBC (in Govan!) as I was due to pack it with my stuff and begin the journey north to Aberdeen after today's show. Clearly a bad move. The police, who arrived impressively quickly, say that the area around Queen Margaret Drive is notorious for vehicle theft.

Ah well, to the Megabus! Can't help feeling that this may some kind of sign...at least it was comprehensively insured.
Posted by Tom Morton at 9:54 am

what an absolute waste.

I know what that is like,I got mine stolen in '87. Didn't bother claiming the insurance because insurance is worthless. Yours will probably say you got a cheap price for living on an island and it wasn't valid for leaving it parked on a road in Glasgow...sad but true...so sorry Jim in Paisley ....