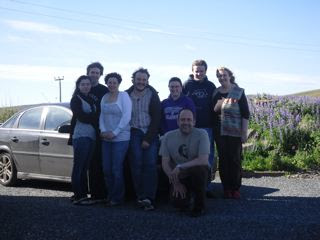 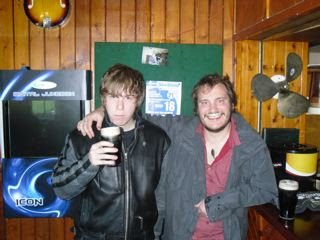 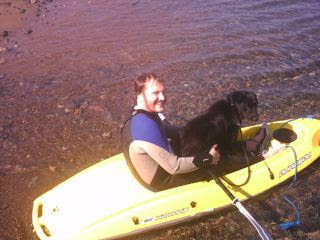 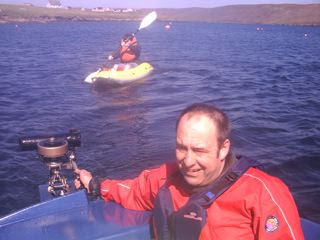 Some great weather hallmarked the visit to Shetland of my eldest son Sandy and his wife Elaine (and their husky-labrador cross Cuillin, who has an affection for hens) and later in the week Magnus and Laura. All this and James's 18th birthday too.

Friday saw a lot of messing about on the water, mostly to enjoyable effect. The dinghy Cryptonomicon, however, proved somewhat unequal to the task of carting folk about; I'd forgotten how inherently unstable sailing dinghies are. And when the much-vaunted British Seagull 40-Plus motor failed, it proved impossible to get the boat back onto her mooring, paddling against a strong wind. So it was out of the water, onto the trailer and, I fear, into the classified ads with her. A bigger, more stable boat is needed.

The kayak was a success, however, and is more than capable of holding man AND dog, as you can see. Later that night was the Crofter's Ball, which saw an epic performance of Johnny B Goode by Sandy, Martha, James and myself. If only I could play that intro properly...

I'm off on the boat tonight to pick up the motorbike and begin the Journey's Blend trip on Thursday. I'm somewhat nervous, but looking forward to it.
Posted by Tom Morton at 10:24 am

Looks fantastic up there!

You must be thrilled to be emmbarking on your journet with repaired bike? Will you be broadcasting during that time?