Midsummer: because you're gorgeous... 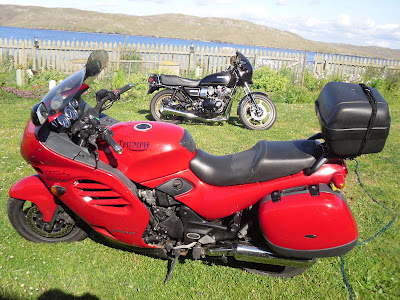 It's been sitting untouched for three months, but the Suzuki GS1000G (shaft drive: I fear chains)complete with new, self-fitted exhaust system, burst into lumpy life quite the thing this afternoon. In the 1980s, this would have been a great big huge monster of a muscle bike; now it feels, compared the the Triumph Trophy, like a BSA Bantam, with its square-section tyres and see-through chassis. But you can't beat an 80s parallel Japanese four for noise. Nicer than a v-twin any day of the week.

It's been painstakingly restored, the Suzie, with really wide hooligan bars, so I swept down to Brae for the papers feeling like I was on a wee Harley with proper brakes. Shetland is alive with bikes this weekend, as it's the annual Simmer Dim Rally. Lots of waving. The Fellowship of the Road!

It was time to carry out an audit of the Big Red Bathtub and decide what to do with the Triumph 1200. First job was to clean it, and then remove all the duct tape which had been used on the Journey's Blend trip to secure wobbly light lenses and mirrors. Some deft dodging with a screwdriver and everything was solid again. The main theft damage - broken seat lock and smashed side panel - remains. Dave D suggested leaving the taped-up panel as it is, in order to deter would-be thieves. In fact, it loks OK. The seat's another matter. The catch is pop-rivetted on and impossible to replace. Annoying, as the previous owner had the seat recovered.

Sell it? That was my half-intention when I got the thing, once the 1000-miles around Scotland had been completed. But the Trophy is a truly fantastic looking bike, and beneath its dodgy Alfa Romeo respray and broken bodywork it's a really reliable express train, an old school continental cruiser, serviced, with only 29,000 miles on the clock.

But I have a yen for a Moto Guzzi California...

Nope. I'll think about Guzzis another year, if I'm spared. The Triumph is clean, happy and handsome and I'll hit eBay for some bits to fix it up. The Suzuki is too lovely to part with. And now...back to the shed with you both!

I have just bought a guzzi monza, a fantastic bike faar more fun than the trident cos you have to try harder than on a bigger bike buuut it handles so sweetly and the electrics didn't go bang in the monsoon which was this weeks weather