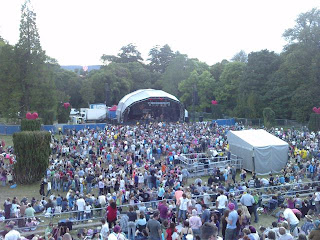 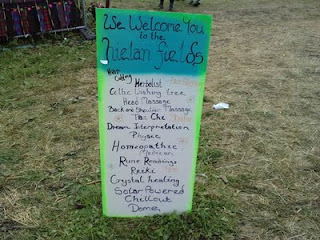 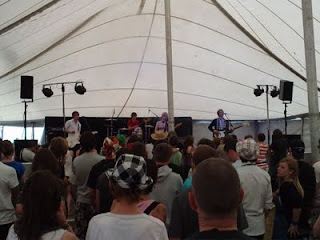 It must have been sweet revenge for Joe Gibbs and Rob Hicks to see Belladrum sell out this year, and, under mostly sunny skies, deliver the best atmosphere of any festival I've been to. Both the Outsider and connect Festivals owed - being charitable - a great deal to the Belladrum inspiration, yet both were essentially commercial operations organised by vastly expdrienced, highly efficient groups. And of course, both had to be cancelled in the face of financial worries.

Bella marches to a different drum. Joe's an old-style bohemian aristocrat, Rob is probably the most dynamic and yet grounded gig promoter I've come across. They are committed to the notion of a community festival that wears its hippy origins on its sleeve, covers all the angles from politics and literature to hard rock and great food, and is a safe, family-friendly environment. It's interesting that the headliners (Ocean Colour Scene, The Editors, Saw Doctors, Seth Lakeman) were in no way first-division festival draws, and yet still the event sold out - for the first time ever. People come for the festival, the bands are, in a sense, secondary. Though huge kudos to The Harlands, from Wick (pictured), who stormed The Seedlings Stage having won their spot via a talent competition. Catriona, their lead singer, is the Katy Perry of Caithness

I was primarily involved with the Co-op Verb Garden tent, where Iain MacWhirter runs a series of debates on everything from ecology to Yoof, and conducted a memorable interview with Lloyd Grossman (the sauce guy), there to play with his punk band. As tends to happen at Bella. I contributed to the debate on digital music, then, with Martha and James, performed for the first time the Drinking for Scotland show, which went really well. Martha and James both played brilliantly. Then, with John and Dick Beach from Fiddlers in Drumnadrochit, I was involved in two whisky tastings under the title Belladram. The cask strength Pulteney was wonderful.

Congratulations to Stephen Wright and all the Fairplay team, who ran the Verb Garden. Also to Chris on PA. A potentially nasty incident was averted after the festival programme closed on Saturday night when a stray 'floating airborne lantern' set fire to the roof of the Verb Garden tent. It was quickly extinguished, there was little damage and no-one was hurt.

The Fiddlers in Drumnadrochit is a lovely pub, a real centre of whisky excellence and has both a greta coffee shop and some very nice rooms, where we stayed. Thanks to everyone there for the hospitality.

The camper van behaved impeccably throughout, and we were in Aberdeen yesterday in plenty of time for the boat. Alas, I'd forgotten to book the van onto the boat, but NorthLink managed to squeeze us on, despite a packed car deck (it was the Orkney Show weekend, and a host of horseboxes was due on in Kirkwall). Now we're home.

A word about the food at Belladrum. It was superb. And having a Co-op outlet meant drinks and sandwiches could be obtained at shop prices. Oh, and finally, the Hielan' Fields, where all the Reiki, meditation and Findhornian folk were in action. I met a guy who had gone up there to see what was happening, and found there a 'Celtic Wishing Tree' where you had to write your healing request on a ribbon and pin it to said object. Out of curiosity, and in a spirit of groovy identification with the mystic vibe, man, he had a look at what was written on a couple of the ribbons. The first read 'I wish I had a bigger dick'; the second said 'I wish that Rangers would get relegated and Aberdeen win the championship.' Not Celtic, then?
Posted by Tom Morton at 11:25 am

sounds brilliant - need to try and go next year.