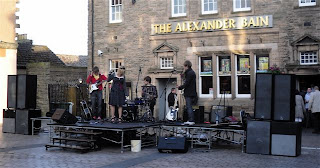 It's funny how things work out. I was in Wick working on a documentary about prohibition (Wick was 'dry' from 1923 to 1947) and coincidentally it was the gala weekend. Playing in the main square was a teenage band called The Harlands. Girl singer, platinum blond, three nerdy guys. They started with cover versions of The Killers' All These Things That I've done and The Undertones' Teenage Kicks. Not perfect, but somehow...sullen and joyful at the same time (it was a drizzly night in Wick, for goodness' sake. The notion that a bunch of teenagers could be playing Teenage Kicks, in 2009, in Wick, was somehow unbearably poignant.

Anyway. The drummer's dad, Douglas, got in touch after I mentioned on the radio having seen them. They'd won through a Battle of the Bands thing to play at Belladrum. So me, Martha and James went along to see them open the Seedlings Stage on Saturday. All original material, this time. They drew a big crowd and took the place apart. This time Catriona, lead singer, was all over the stage like...well, like the rock goddess she clearly believes herself, with some cause, to be. No, I won't say 'The Katy Perry of Caithness' again. She may well be quite insulted by that.

Who knows what'll happen now? But if you want to watch a band struggle with what seems likely to be some sort of encounter with fame, if not fortune, start on their myspace page, which is
http://www.myspace.com/theharlands. The first two tracks were produced by Kit Clark, no less, of Danny Wilson. Name changes? personnel changes? A move from Wick? All the hope and heartbreak of rock'n'roll?

This is how it starts. Still. Always. A teenage dream's so hard to beat...
Posted by Tom Morton at 9:51 pm

"Alexander Bain was born on the outskirts of Wick in 1810; he invented the electric clock and designed an electromagnetic means of transmitting images. A commemorative plaque on the council offices, next to these premises, records his considerable achievements."

Transmitting images? Is that a fax? Seem to remember a great CH4 series called 'How Everyday Machines Work' or similar, with 2 guys standing in a field sending experimental faxes to each other ... But what I've seen of the new beeb science series it is pretty dull ....

They sound really good, well the three tracks on the myspace do! Love their myspace sounds like "nothing you've ever heard before"!

Will be looking out for them.