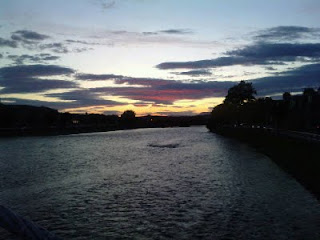 The camper van made it to Inverness from Aberdeen without any untoward excitement, and after raiding Tescos for tea (that Cumberland sausage is always a motorhome winner)teabags, milk and coffee, I discovered there was no gas. Ah well. Not that I had any matches to light the cooker anyway.

I was parked up, for old times' sake, in the BBC car park. This was the site, some 14years ago, of my now-infamous period of living, weeknights and days in said car park, in a dubious Fiat camper soemone had driven from, funnily enough, Italy and abandoned in Cullen. That was an early morning show and sometimes I had to be physically extracted from said van, in no fit state to do anything, let alone present a radio programme. 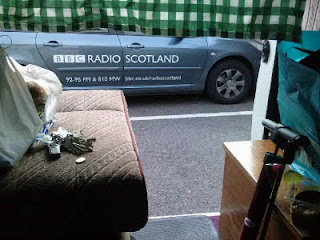 The view
Now, of course, being older, saner and more abstemious, I sipped a small claret and gazed at the, err...view. Then I took a walk around the Inverness I know better these days as the fictional landscape of my novel Serpentine. Only to find it quite different. Dolphinsludge, Queen of the Highland Fleshpots, is now quite the upmarket boutique city. It was also, as usual at this time of year, utterly rammed with tourists of every nationality. And who can blame them? Inverness remains one of the most spectacularly sited cities in Europe, and the summer sunsets are Landseer Stag-At-Bay specials.

My night in the camper was not without its problems. The bed is extremely narrow. It collapsed during the night (my fault; I hadn't set it up properly. I kept having dreams about waking up to find myself snowed in, or panicking due to being late for a radio programme. Then I realised that those weren't dreams. They were memories...

James and Martha arrived this morning on the train from Aberdeen, after a good trip down on the boat. The show today has live music from Pearl and the Puppets, who are playing at Belladrum, as are Martha, James and myself (Co-op Verb Garden Tent). Weather so far looking good, and the festival, for the first time in its history, is sold out.

As for the camper, it looks like we might NOT have to actually sleep in it...
Posted by Tom Morton at 10:42 am