Please buy this hotel and give Northmavine a bar! 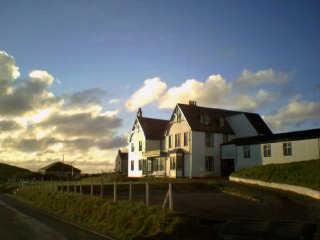 Although to be honest I'm not sure if it's even for sale. I've posted about the increasingly derelict, empty for two years, St Magnus Bay Hotel, which is in our township, before. It's historically important, wooden, beautiful, listed, and was shipped to Shetland on a barge after being dismantled in Glasgow, where it was the Norwegian display at the Great International Exhibition of 1901.
It's (apparently) owned by a south company called Canterbury Travel, who so far to have shown no interest in selling it to various interested parties, preferring instead to allow it to decay. There is now no bar in Northmavine, except for those in the public halls. When I first moved here there were three - The Crofter's Arms in Ollaberry, the Booth in Hillswick, and the Hotel.
Local development company Initiative at the Edge is pursuing the option of community ownership, but that seems a veryu long way off. Meanwhile, vandals and trespassers are being seen inside the hotel more and more often. Somebody save it! Think of the grants!
By the way, it's not in as good nick as this (mobile phone) picture makes it appear...
Posted by Tom Morton at 10:53 pm