My new bicycle! It folds up! 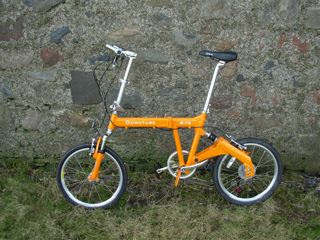 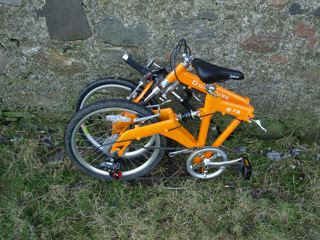 Bicycles! They're great! I used to have two in Aberdeen for my regular sojourns there, but they both got nicked from the BBC's supposedly secure bike park (not only that, but not a single person who works at the Beeb in Aberdeen noticed they'd gone; or the freshly-sawn chains lying on the ground). I still have one at a secret location in Glasgow. It reassures me to think of it, waiting there, poised for a swift run out to Loch Lomond...anyway...this is my latest acquisition. A bike for tucking under one's arm when one gets too tired, and hopping aboard a passing plane, train or automobile.
This is the Downtube IX FS, imported from the USA for the princely sum of, let me see, $520 dollars including incredibly quick (less than a week) door-to-door courier service. That's Philadelphia to the Shetland Islands. I've had stuff that has taken longer to come from Aberdeen.
Bike itself was only $330 dollars, which was an eBay 'best offer' on a buy-it-now of $359. $190 for postage seems a lot, but with a total cost of around £270, that beats any equivalent Dahon or Brompton by a considerable margin. And this is a very, very good bike.
Downtube, owned and run by Professor Yan Lyansky, who designs the bikes himself, sells only on the web and has the bikes made in China. Hence the savings. The quality is extremely high - components (Suntour, Shimano, Zoom) are lowish end but very sound. Brakes (need to cut those rubber gaiters off), saddle, seatpost and bars are all better than standard bottom-end Brompton fare, though it's not a direct competitor. This is a bike you could ride a long way.
Very good 20-inch wheels, good Kenda tyres (though the rear on mine had a puncture, due to tiny slivers of wire polluting the inside tyre casing). But it's the frame that really impresses - incredibly solid, with reassuring latches'n'catches for folding (standard right-angle fold on main frame bar) adapted from your actual quick release levers. Adjustable handlebar stem is amazing value, but it's the sheer rigidity when riding that's striking. Totally unlike my old, very wobbly Dahon.
The Downtube reinforces the notion I've been gradually coming to that for a small-wheeled folder, you MUST have suspension of some sort. I'm 6 foot two, 16 stone plus, and it feels totally secure, very stable, easy to steer, not in the least twitchy. And that on some fairly rough-and-ready roads and stony tracks. Nine-speed twist-grip derailleur worked perfectly straight out of the box, and it's fast enough for my purposes. Will climb some fairly fierce hills (the Clavie, for example, outside Urafirth, Shetland) and cope with our horrendous headwinds.
The aluminium frame is belt-and-braces welded, and not particularly light. Doesn't bother me. It folds down nicely, again not to 'B' proportions, though you can unbolt the rear suspension and tuck that back wheel away if you must. Small enough for popping in the (supplied free!) bag and shoving aboard my regular flight to Aberdeen. No mudguards, and no easy way of fitting them, but my goodness, doesn't it look cool?
The IX FS (nine gears, full suspension) is available on eBay UK at only £25 postage, but the basic price makes it more expensive in total than importing it from the US direct. Also, the US models have been upgraded for 2007 with longer seatposts.
Comes complete with water bottle/pump braze ons, which makes it, I think, unique. I plan to go bus/train/cycle touring in the summer with it and a Bikehod trailer. Can't wait!
Posted by Tom Morton at 8:01 pm

Reminds me of that old Nazareth classic - 'My White, er Orange Bicycle' ....

I'll try this for the third time, what a bloody pussy! Hey Tom, yer new bike reminds of a Moulten speed.

Yeah I saw that bike of yours the one hidden away.