Twanging and howling over for the time being 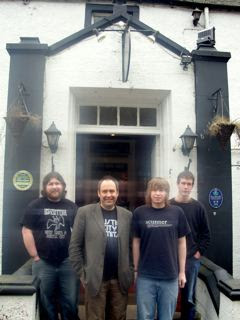 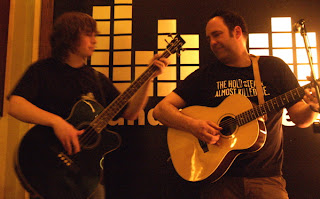 The pictures show, first of all James, me, Malachy Tallack and Steven Laurenson outside The Famous Bein Inn in Glenfarg, and then James and me on Sunday night at the Woodlands Beanscene in Glasgow.
I think the tour went well, on the whole. Many, many thanks to everyone who enabled: Sheila and Neil at Aberdeen MUSA, David at the Bein Inn, Sandy, Fiona, David and Mary at the Lang Spoon Festival, Tam and Simon at Beanscene. And thanks to all the friends, old and new (and some folk unseen for many years!) who came to the various gigs.
At the moment, it looks like we'll be doing a week in Inverness in August, hosting (like last year) a series of special lunchtime events at Hootenannys. Apart from that, I'll be playing at Ayr Beanscene during the Burns Festival, on 24 May.
Posted by Tom Morton at 10:30 pm