Big Bannock, boat and back in Aberdeen 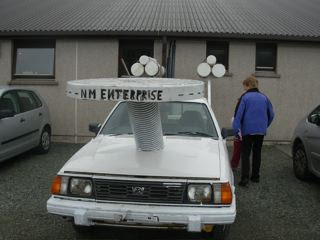 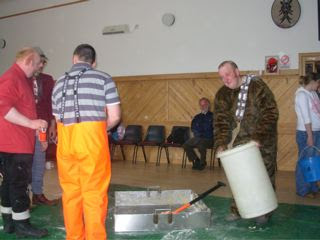 In the Beans coffee bar and an interminable wait for a large latte. Still, at least I get my half hour free internet fix, and a means of uploading some pictures from the Big Bannock on Saturday in North Roe. Actually, I'm not making a fuss about the delay in caffeine dealing, as the sole barista is a very pleasant Polish guy who's been left to do absolutely everything on his own, and is plainly trying his very best. Every so often he goes into the back kitchen and screams, loudly, which is slightly worrying.

ANYWAY, I couldn't participate in the full epic glory of da Bannock, but did have one of the best Shetland lunches ever: how about this for six quid? Freshly made fish soup, four massive, barbecued (perfectly) scallops, a great lump of chargrilled salmon, and a home-made bannock with mutton. Fantastic.

Also superb was the general conceit of the day: Space, the final frontier. All Bannockites were dressed in full cosmic costume, from Ming the Merciless to Obi Wan. There were, as you can see, extraordinary vehicles. And the bannock itself (marshmallow and Sweetheart Stout flavoured) was made. A good time was had by all. I missed, alas, the Merry Tiller Grand Sprix (Spree) but doubtless video will surface on YouTube soon. Meanwhile, I have the t-shirt and the current DVD, which rivals Citizen Kane in artistic accomplishment. It's called Northmavine Vice, and I heartily recommend it. Better than anything by Ken Russell, that's for durn tootin.

Coffee has arrived. Show starts again today after a four week break, and I think it's going to be great! See you on the airwaves! or, if you prefer, hear.
Posted by Tom Morton at 9:52 am