Home after Children in Need, No Music Day, the Great Volvo Adventure and more... 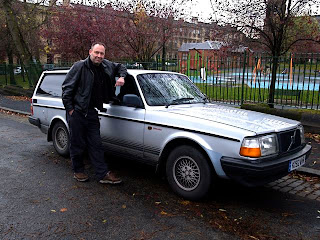 Discombobulated is not the word. Actually, discombobulated is rarely a word worth using as it's so difficult to spell. Anyway, I'm disorientated (some say disoriented, but that's WRONG)dizzy and unsteady on my feet, not because of drink (don't jump to conclusions) but last night's boat trip north from Aberdeen.
It was a corker. Severe gale nine, and a northerly, which meant the good shop-shaped-ship Hrossey was slamming most of the way. 'Slamming' being a technical term not denoting poptastic approval, as in 'hey, that band were slammin', man', but meaning the boat was rearing up out of the water as it hit the massive oncoming waves and then dropped, flat-bottomed, into the water with a resounding bang.
Phenergan elixir meant I was dozy, but the movement was so marked it was impossible to sleep for long. Anyway, I'm home, and with the Volvo Torslanda too! Here's a picture of the mighty £390 car by my old mate Stewart Cunningham, nicked from his blog, which is well worth checking out, along with a snap of Boo Hewerdine (formerly of The Bible, and currently Eddi Reader's guitarist and songwriting cohort). Boo played at Bar Brel in Glasgow on Wednesday night, which was also No Music Day. Guess I betrayed its spirit, though having done a totally music-free two hour show in the afternoon, I think I deserved a break. 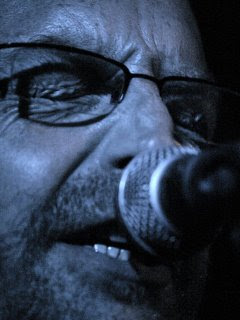 Boo seemed to want to display his inner busker at the gig - too much singing along and cajon-bashing by enthusiastic friends for my liking. A shame, because he's an astonishingly gifted songwriter and singer.
On Saturday night I saw The Poems, featuring Karine Polwart's wee sister and an astonishingly well preserved Robert Hodgens (aka Bobby Bluebell) at the new and excellent Stereo venue in Renfield Lane. An odd business, what with mayhem outside in the aftermath of Scotland's defeat by Italy. There are some fantastic songs in the set but a degree of discomfort with the live environment. New single I Am A Believer is great.
CIN went well, I think - check out the pictures on Jeff Zycinski's blog, and the No Music Day show rocketed along. Big thanks to Colin Somerville for epic sidekick services. And a million thanks to the many people who texted, emailed and phoned, many (the majority, just) saying how much they'd appreciated the absence of music, but were looking forward to having it back.
And now it is.
As for the Volvo, it's always with trepidation that you buy something motorised on eBay and then face the drive to the Shetland boat. The Mighty Torslanda, last of the great Volvos, gave no hint of trouble as it made stately progress up the M90. It's odd sitting inside - it's an older generation of car, small doors, small windows, a sense of seriously protective bodywork, old-fashioned suspension, rear-wheel drive. Yep, tank is the operative word...AND discombobulation.
Posted by Tom Morton at 11:29 am