The shirt off Amy Winehouse's back 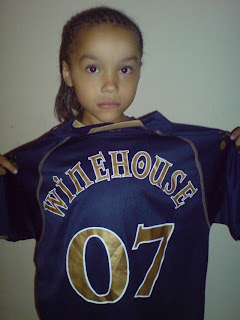 Here we have the Scotland shirt worn by Amy W at her Barrowlands gig in Glasgow last Saturday, caught by regular listener Brian when she threw it into the audience and(it's a kids size, XXL) now the proud posession of his wee daughter. Signed, too!

Here's the email Brian sent to the show:

I went to see Amy at the Barrowlands on Saturday. Great show and a storming atmosphere post Hampden etc. But on the subject of e-Bay… Just before the encore Amy came on with a Scotland jersey, Winehouse, No 7, said sorry about the football then tied it up and gave it to one of the backing singers who flung it into the crowd…..right to me! It would have landed on my head if I hadn’t grabbed it, then hid it quickly from the descending hordes who scrabbled about at my feet while I looked elsewhere.
It got a lot of attention post gig, and I’ve had many people saying that I should put it on e-bay, but I can’t do that. Doesn’t seem right really, like selling a present. He wee yin was wearing it yesterday afternoon, fits her better than me anyway, but it’s a top souvenir, and Amy signed it too, with a x. She’s clearly still stuck on Blake though, wouldn’t stop talking about him in Pentonville Prison. Asked us to send him roses.
Great talent Amy, hope she has better times ahead. She was clean and sober on Saturday unlike much of the audience…
Posted by Tom Morton at 12:42 pm