A stroll by the River Kelvin...call the cops! 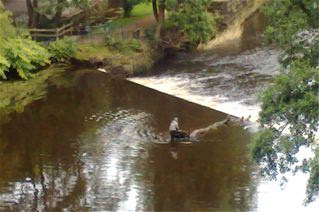 I'm in Glasgow, so there I was crossing the Queen Margaret Drive bridge over the River Kelvin in Glasgow when I spotted...a man in the water.

Well, not so much in as on. He had climbed out along the weir (site of an old mill, I think)and was apparently trying to free a large fallen tree that had been swept down the river and become jammed. No life jacket, no help...a small and interested crowd gathered on the bridge to watch, and the consensus was that the police should be called. So I dialled 999. Within minutes, police and fire brigade had arrived, as the man gave up bouncing on the log and began heading for the bank. The sirens must have been a giveaway.

I left as various members of Her Majesty's Constabulary began....introducing themselves to the chap. This being Glasgow, spectators were not short of a comment or two - 'Talk about walking on the water....he's just having a wee stroll by the river...' etc etc.

but what happened to the wee tree?!!

of course, if i had been there, it would have been
reported as "the poor misguided American Kevin tries to free tree in the Kelvin..."