An inconceivably glorious day in the kayak 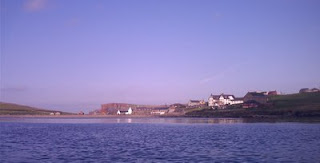 I've already been out on the water more this April than in the whole of last summer - mainly due to the easiness of using the Bic Ouassou kayak. And the astonishing weather. This morning in Hillswick it's like summer - genuinely hot in the sunshine. It's flat calm, too.

Bruce (local blacksmith and all round expert in all things nautical) came round for a look at the Kestrel dinghy, and we managed to raise the mainsail, revealing a need for some sewing action. Still, the wee fibreglass boat is sound and this morning's post brought a restored British Seagull outboard for it. Of which much, I expect, later. Bruce also offered me the makings of a mooring, so with that it was out in the kayak for a wee bit of depth sounding.

It was also a chance to try out my new camera. Taking pictures is one of the great pleasures of being out on the sea, but I was always conscious of how easy it would be to damage a digital camera with seawater. So, off to eBay, there to obtain a Vivicam 5399 camera with 15-metre underwater case. How much? For five megapixels? Nine pounds. Not ninety. Nine. Less than 10. Ebay is a wonderful thing.

And this is the result. A picture of Hillswick I've been trying to take for years, showing the red cliffs of the Eshaness peninsula behind the village. Hillswick is basically built on a shingle spit.

When I finally beached the kayak after an hour or so, I was overcome with an unwillingness to return to dry land. Still, work calls!
Posted by Tom Morton at 10:45 am

Crikey you dont have put the postie through his paces - a whole outboard motor!

Seriously though lovely picture looks idylic. It is not quite an Industrial Estate in EK I will say that!

Looks great, got to imagine the water is still very cold though. Do you have to wear the full dry suit in case you take a spil, I've used a Kayak only a few times, and toppled every time, you're a braver man than I.

Tom suit is not so much dry as a bit of a damp suit.In fact it lets in so much , if you went under it would weigh you down.
Ebay £20 rejects!