Creamola Foam: The real thing unearthed and an imitation erupts

Creamola Foam. It's time has returned. The great lost Scottish drink, its chemical formula apparently mislaid during a slew of company takeovers, tins and cartons of the stuff appearing only rarely and fetching vast sums on eBay, seems to have invaded my life recently.

It has popped up on my radio show once or twice, but I really didn't expect to see a vintage tin (carton, really, in its latter years, as the 'tin' was made of cardboard) ever again. Let alone taste it. But the power of nostalgia is immense.  It has become an iconic Scottish retro-brand, like Mother's Pride bread and Irn Bru, to the extent that you can get T-shirts and bags bearing the logo.

Then last week, I received a package from a  Robert Kelly in Larkhall. Inside was...my precious...a tin of Creamola Foam. The real deal, albeit the late cardboard version with the plastic top. The contents were, it must be said, a bit lumpy and brownish. But still, chemical analysis would surely be possible. I could recreate Creamola Foam for a new age! It would live again!

But. Yesterday, walking down Byres Road in Glasgow, I passed the sweetshop I Love Candy, and a blackboard outside was advertising...tubs of 'Creamola foam'. Three quid. THREE QUID? Anonymous plastic tubs, they were, marked Krakatoa Fizz. I bought a raspberry version and took it home.

"They analysed the original and it's been phenomenal" said the shop assistant. "People have been buying one and then coming back for more. They're making cocktails with it!"

As it turns out, a company in Dumbarton which specialises in vintage sweets seems to be responsible for gazumping my half-formed business idea. Originally available in Edinburgh as 'Kramola Foam' the Krakatoa version is made from sugar, tartaric acid, extract of quina, citric acid, sodium bicarbonate, stabilisers and natural colour. I missed, somehow, the Scottish Parliament motion from Rob Gibson in January that the 'new' Creamola Foam was going to bring about revolutionary change, independence and a revival of the compulsory full set of dentures for all 16-year-olds...but see this story.

I have to tell you, although it foams in exactly the same way, Krakatoa Fizz... 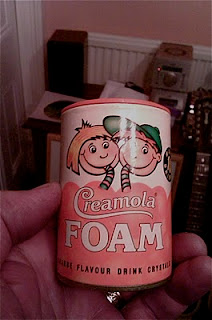 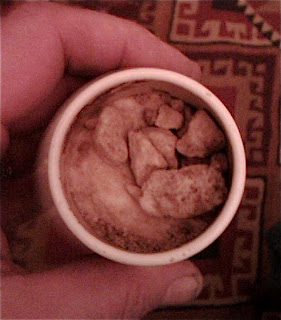 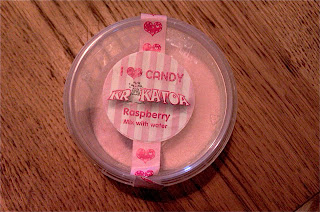 OH NO... I saw the ad in love candy and was going to buy some. it used to be my teenage friday night treat (pre snakebite and black)... won't bother now
jolene

BTW wake-up and taste the coffee creams... Springsteen is & always will be over rated American gash!

I guess the old original CF had loads of 'E's in it, and that gave it the taste and 'buzz' we craved back then! However a few months back I chanced upon this companies products - Kramola Fizz, and road-tested them. They are not quite the real thing either, or maybe my memory is too tainted, but come quite close and they certainly have that 'buzz'!! Can see for yourself sometime via this link ...
http://www.allmarksweets.co.uk/

I have to disagree. I have tried the kramola Fizz which I thought tasted like disolvable orange c tablets I use to get as a child. Nothing like CF. BUT.... this Krakatoa was just as I remembered it, it fizzed, and the foamy head gave me a little moustache just as it did as a kid. I would recommend this to anyone. Excellent just as I remember.

Krakatoa Foam is FAB! I love it tasted just as it did back in the 70's
Try it for yourself and I'm sure you will agree with me

I sell Kramola Fizz in my shop,Allmarks Sweet shop and online www.allmarksweets.co.uk.
It has an improved taste now and has more taste and the frothy head is long lasting now,and can get it in a wee silver tin now.
Can I just say we only charge £1.60 for a wee tub whereas some places charge £3.Don't see why people should have to pay a lot for Nostalgia...Our wee shop is open 7days to 10pm.Come and see us.I will even let you try the Kramola/Cremola first if you want.CHEERS...