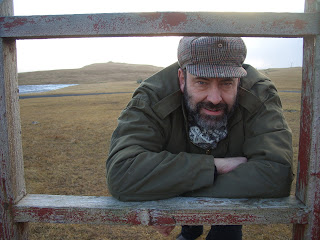 New Year's Day proper, daylight, up and about, and the detritus from Hogmanay/birthday celebrations isn't too bad, thanks to Susan, James and Martha (and, to an extent, me) tackling things before a  belated bedtime. Except Quoyle the ancient labrador has been sick and peed everywhere. For sentimental reasons, he was indoors instead of in his incontinence kennel. Ah well, Happy New Year.
Breakfast on tea, coffee, vitamins and cake, and then out with Susan for a drive up to the cliffs at Eshaness and a swift, cobweb-dispelling walk. It's bitterly cold and windy, with clouds of spume being blown up from the depths of the geos. I never fail to get nervous here. The wind's coming in great, disturbing dollops and the cliff edges are slippy. We beat it back to the car and head home in the flickering, watery light.
More clearing up, then Martha and Susan head off to the Busta House Ne'erday lunch. James and Mag are up and remarkably fresh for the season. So am I, actually. I'm horrified to note that my final 'refreshing' beer, after too much whisky, a bottle of McEwen's Champion, was actually a Superlager-strong 7.3 per cent. Maybe the hangover's still on its way.
I'm immersed in Stuart Murdoch's excellent book The Celestial Cafe, which is making me rather homesick for Glasgow. And it's also pointing me back towards Belle and Sebastian's CDs, which, at the advanced age of 55, I'm at last beginning to appreciate. What's going on? It's always been the epitome of arch indiekid ultracool, the B&S thing, and for years I just didn't get it at all. Now it seems warmer and more approachable, somehow, and not just the newer, expansive records like Write About Love. The entire canon. Odd. Wrapped Up in Books still sounds like Cliff Richard's In The Country. But in a good way.
Stuart's book - it's a collection of sometimes quite shockingly intimate, beautifully constructed web-diary (not blog) entries - is part of a run of rawk-oriented reading matter I've been tackling of late. Allan Brown's Blue Nile book, The Stuart Adamson (Big Country) bio, the reissue of Neil Ian Munro's John Martyn tome and just arrived, James Yorkston's tour diaries. All good in their own ways, but the Murdoch and B Nile books are so steeped in Glaswegiana reading them is like walking through Kelvingrove, first in the 80s, then in the late 90s.
Right, time to do some washing and visit last night's leftovers. Looking forward to the first episode of Zen tonight - or is it tomorrow? Loved Michael Dibdin's books.
Posted by Tom Morton at 2:57 pm

Glad to read of the slow recovery trail.
Resonance of past icy Hogmanays and whether my liver sustained permanent damage.
Happy New Year to you and yours

Happy New Years to you and yours, Tom. Sláinte mhaith!

Allison Crowe and all our crew here in Canada hope to return physically to Scotland in 2011. In the meanwhile, there's blogs and music to bring things home :)

Not sure if I sent you this link before... if not, it's time now - Edinburgh-based photographer and musician Shona McMillan's put together family movies with Allison's version of Phil Ochs' When I'm Gone to create Home Reflections

Hi Tom
Strangely enough I to at the mature age of 48 have recently been listening and enjoying B&S.Mid-Life Crisis?

Cheers, Allan aka The Hillend Dabbler

Homesick for Glasgow? After visiting there for barely four hours, I can now understand why. See latest post on the perpet expat.