Remembrance: The tragedy of HMS Bullen and the bodies the sea returned

My editorial from this month's Shetland Life Magazine: 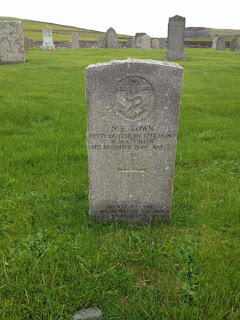 November is the month of remembrance. Remembering the dead of not just two world wars, but the wars that have taken place since. The ones still going on. Those who left to serve and fight, but never returned, and those who came here to die. There were 78 recorded air crashes on or around Shetland in World War Two, many involving multiple fatalities.
And there were those given up by the sea. It’s something rarely mentioned or discussed, and awful to contemplate - the many, many bodies washed ashore here in the course of world War One and World War Two. But a cursory look at the stones in our cemeteries reveal the appalling numbers. The recent notices that have appeared on graveyard gates pointing out that Commonwealth War Graves lie within will perhaps have drawn folks’ attention to this for the first time. The ones in Eshaness and Hillswick drew mine.
There are other signs of death and destruction still visible. The remains of some of those air crashes, are, as this magazine has often pointed out, still lying on Shetland hills. You can see the solidified remnants of heavy bunker oil from long-lost convoys ingrained in outcrops of rock, and until quite recently a bale of raw latex, cargo from a sunken cargo ship, was used to hold down hauled-up boats at Heylor.
But the gravestones all tell stories. Notably the one on the front cover of this magazine, which you will find in the old Hillswick graveyard at the West Ayre - site of an ancient kirk, with nearby monastic settlements and a broch also indicated. A place which has always been special, probably always holy, for as long as humans have been here.
The story of Petty Officer NE Lown  centres on HMS Bullen, a Captain class Frigate built in the USA as part of the lend-lease scheme which saw a great deal of military materiel being provided for the use of British Forces in the Second World War. She was system built as a submarine hunter, welded together like the notorious Liberty Ships, and her crew, probably including PO Lown, travelled to New York aboard the Queen Mary to bring her back across the Atlantic. They had some adventures in the USA, some of which you can hear about in the voice of one of the crew members, Rating John Albert Hodge interviewed here http://www.iwm.org.uk/collections/item/object/80020888 for the Imperial War Museum’s archives.
HMS Bullen - named for one Nelson’s commanders at the Battle of Trafalgar - joined the 19th Escort Group based at Belfast, and on 6 December 1944 she was off Cape Wrath, protecting a convoy which came under U-Boat attack. A torpedo from  U-775, commanded by Oberleutnant Erich Taschenmacher, hit her amidships, an explosion occured on the starboard side, just behind the funnel. The aft engine room and boiler room probably flooded immediately. The ship quickly broke in two, the forepart turning on its beam ends and the aft-section floating vertically Within an hour and six minutes, both parts of the ship had sunk completely. Ninety-seven men were rescued, many in a poor state from cold, injury or from inhaling oil. Seventy-two died. U-775 sank only the Bullen and one merchant ship. She was only at sea for a total of 86 days.
Erich Taschenmacher survived the war, surrendering U-775, which was sunk by the Royal Navy along with dozens of other empty U-boats. U-775 was used for target practice.
Petty Officer Norman Lown, aged 27 and leaving a widow at his home in Dover, Lilian Rose, was carried hundreds of miles to Shetland, along with three other HMS Bullen crew: Able Seaman Arthur Wealthall was buried at Eshaness, Leading Stores Assistant Francis Farrell and Leading Stoker Felix John Read  in Lerwick. PO Lown lies within the calling of the sea at the West Ayre, and the Eshaness light flares in the distance every night.

Lilian Rose's heartbreaking inscription, easily missed at the bottom of the stone, perhaps expresses the real cost of war, the true and eternal story of loss. And sums up why it is important that we remember, not just on 11 November, but always, the price that was paid by so many.

“To the world, he was just one. To me he was all the world. Always loved,deeply missed.”
Posted by Tom Morton at 2:02 pm

My uncle Tony (Antony Griffin) was killed on this ship. Is there a memorial in the area for the Bullen?

Matt said...
This comment has been removed by the author.
3:53 pm

There is no specific memorial in Shetland to the Bullen, just the graves of those whose remains washed up here. I can’t find a memorial to the Bullen sinking alone, but so many ships were sunk off Scotland in WW2 that is not surprising

Thank you for the reply.