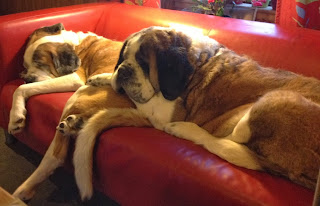 They are snoring. Well, five-year-old rescue mutt Rug is snoring, rhythmically. Lulu, who is 11 years old - ancient for a dog as enormous as she is - is dreaming, so she yelps, grunts and groans, twitching occasionally, all her past adventures with sheep, postmen, Historic Scotland building inspectors, seals and the Great Dane who lives next door (Baskerville by name) presumably bouncing around her enormous head and minuscule brain.

As she twists and turns in her sleep, the room shakes. As she breathes, the room wobbles, the air vibrates. Rug, poor soul, mistreated throughout her previous life, kept in a cage, battered and berated, makes less immediate impact, but is friskier when awake. And that can see tables upended, crockery smashed, and small children sent flying by an innocently wagging tail.

So this is what passes for quiet, with both dogs asleep. And they sleep a lot. I've known them collapse after their evening walk and not haul themselves from their various sofas (they favour four, the most comfortable in the house) until two the next afternoon. They are, thankfully, both continent. Only once, after Lulu managed to get at a bucket of used chip oil, drinking about four litres, did disaster strike, and a seriously soiled sofa had to be disposed of. She had the grace to be very upset. But not as upset as I was. Or the binmen.

In the morning calm, I regard the two dogs, and think about cats. I'm pondering a local advert: 'Wanted, feline mousekiller, housetrained, neutered, not viciously vengeful when aggrieved, non-allergenic, must like dogs. Very big dogs. Or at least put up with them. Also, must be robust.' We have killed, in this old house, 90 mice since the end of September. It is now mid-November. There are mousetraps in every corner, poison all over the place. The metallic aroma of rotting rodent is omnipresent.

Alas, the last kitty was killed by Lulu. Not in a frenzy of saliva-flecked violence, but because Lulu  fell asleep on top of the poor creature. He wasn't flattened, just somewhat squashed. And suffocated. Arnold - that was his name - had gone to sleep, ill-advisedly on a St Bernard couch. Perhaps the soft, warm underbelly of a dog was initially not too uncomfortable. Twelve hours later, though, the pressure and lack of oxygen had done for Arnie.

I'd approach the Cats Protection League for one of their surplus-to-requirements kittens, but is it fair to bring one into this dog-heavy (and heavy dog) environment? And how would the St Bernards feel?  Once you've seen two 11 stone dogs trying to chase a cat up a set of curtains, you don't easily forget.

Maybe I'll have another think about it. And let sleeping dogs lie.