Then play on: Looking back at the weekend, the Clutha tragedy, and being on air when it happened 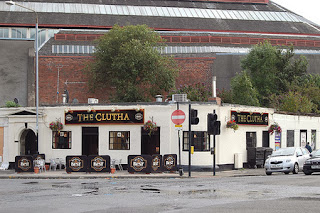 If there was one thing I was looking forward to during the three live, three-hour Morton Through Midnight shows I present (10.00pm to 1.00am, BBC Radio Scotland, Friday through Sunday) it was playing a track called Maybe I'll Come Back Home, by a band calling themselves Fantastic Lights. An old friend was involved, emerging from a musical silence, at least in public, that had lasted almost 25 years, and we would be first to play it anywhere.
We played that track at 10.29pm. By the time the segue of it and the following song, The Rolling Stones' Fool To Cry, was over, Twitter was already flickering with aghast stories that seemed to make no sense: a helicopter had apparently crashed onto a crowded pub in Glasgow. The Clutha Vaults.

I broadcast from my home in the Shetland Islands, but my producer Ravi Sagoo and senior producer Nick Low of Demus Productions, the company that makes Morton Through Midnight for BBC Radio Scotland, were both working from the BBC's Glasgow HQ at Pacific Quay, a couple of miles along the River Clyde from the Clutha. Twitter and Facebook are crucial aspects of the show's identity, allowing listeners throughout the world to participate, argue, suggest songs and generally become involved in the whole process of broadcasting. And the vibrant Scottish music scene is heavily represented in my own and the show's social media. A band, Esperanza, had been playing at the Clutha which is one of the city's most active small music venues. Amazing, shocking iPhone pictures of absolute clarity emerged quickly. Were they too clear? Was this some kind of movie shoot, or a hoax?

We played more music (the show has a particular bias towards Scottish pop, folk and rock, new and old, but plays quality music with a middle-aged bent from all over the world) but it was difficult to concentrate on the usual comedic conversational trivia of a Friday night (one theme was home brewing). More and more pictures and shocked eye-eyewitness accounts were coming in. Nick spoke to Martin Smedley, one of a handful of journalists across BBC radio and TV who were in the building so late, on what is usually one of the week's quietest nights. He was getting the same unconfirmed information. Sky News and BBC News 24 began carrying the Tweeted pictures, but again there was absolutely no official confirmation.

We had a live news bulletin imminent at 11.00 pm and it became apparent that this was no hoax, that something truly dreadful had happened. As Martin mobilised the news team in Glasgow, I pulled the comedy home brewing tales that were coming in and kept the introductions to records short. We began referencing the incident on our own Twitter and Facebook feeds. The 11.00 bulletin ran the story at the top, cautiously and rightly prefacing everything with 'reports are coming in' but brilliantly using the first, shocked telephone interview with Jim Murphy MP.

What to do next? Facebook and Twitter were going into overdrive and it was quickly clear that this was very, very serious. But there was still no official confirmation or anything yet from BBC reporters on the ground. We had a half-hour pre-recorded interview, heavily trailed, with the legendary guitarist and singer Dave Edmunds, which would run from about 11.15pm to 11.45pm. After discussions with news, it was decided to play that out, while the news gathering operation swung fully into action, and there would be an extended bulletin at midnight. I began reTweeting and Facebooking links to confirmed BBC Breaking News reports online.

I was reeling by that time as we were all aware of the Clutha and feared we'd know some of the victims too. After the 11.00pm news I just said I was shocked (“slightly shocked...disturbed...well, more than slightly...”) . That Dave Edmunds interview seemed hours long. Always, in the back of my journalistic mind, I was wondering (a) if we should be playing music at all, (b) how much should a music presenter say during a massive breaking story like this, and (c) how much could we trust the stuff coming in on Twitter?

Before and after the package (which gave our news folk the time to get reporters to the Clutha and to organise what quickly became a massive news gathering operation) I reiterated what we knew for sure and that there would an extended news at midnight. By this time one of the clearest dichotomies between Twitter and official news reports was the nature of the helicopter. Pictures online showed clearly that it was a police aircraft, but news outlets were hesitant. Retweeting the pictures without comment seemed enough, though I found myself referring to 'the crash of a police helicopter' while trailing ahead to the news...

The midnight bulletin had eyewitness reports, BBC reporter Andrew Kerr at the scene, what official confirmation was to be had and the detailed account of the helicopter's descent by The Sun's Gordon Smart . Glasgow-based staff were now covering the story for all BBC outlets in radio, TV and online and the demands on them were enormous. Now what for us? Pull the show from midnight and hand over to rolling news reports?

News settled on an extra bulletin at 12.30. We sifted through the music running order and extracted everything potentially jarring or offensive in tone or lyrical content. We began scheduling in calmer, longer, more instrumental tracks. Otis Redding first, and trailing ahead to the 12.30am news.

By this time we'd had one or two angry texts asking why we were playing music at a time like this, but many more praising the way things were being handled. This probably represented listeners who had tuned in only to try and catch up with what was happening, and those who regularly listen to BBC Radio Scotland at that time of night.
That last hour was very difficult. It seemed right to briefly comment on the seriousness of the situation and to segue tracks together, as well as constantly trailing ahead to news, while keeping the social media feeds up to date and relaying any confirmed information we could. The delay in any official number being made available for emergency information seemed interminable. On reflection, we did the best we could in trying circumstances.

At 1.00 am there was I think an absolute model of responsible news reporting from BBC Radio Scotland: Proper, thoughtful choice of eyewitness reports, calm reportage, the facts and the right amount of background and colour. At the very least, the fact that there was music being broadcast beforehand provided the time for that to happen.

By late Saturday afternoon, the scale of the tragedy was clear, official and political responses were in and the awful situation had stabilised enough for us to know that we would be broadcasting three hours of music that night. But what to play? And to talk about? On what was St Andrew's night?

To me, there seemed no choice: Glasgow is my home city and we should pay tribute to it, celebrate it, long for it, recognise its spirit and try and grieve with it. This had been a seven-nights-a-week live music pub, some of our regular listeners knew the place well, knew its owners and the bands who played there. Anything else would be disrespectful. But it was also St Andrew's night and the notion we'd had previously of playing lots of records by people called Andrew might still work, if toned down.

I began looking for songs about Glasgow or from Glasgow musicians. Co-incidentally, my former colleague at The Scotsman, the London-based writer Audrey Gillan, posted a link to her own Glasgow playlist on Spotify and notably the Billy Connolly song I Wish I was in Glasgow, performed by Iain Mackintosh. By the time producer Gregor Reid and I  were preparing the programme down the line between Shetland and Glasgow at 9.00pm, we had a rough running order worked out.

We started with Michael Marra's great anthem Mother Glasgow, performed by Hue and Cry. We ended three hours later with Frankie Miller singing Dougie Maclean's Caledonia. We had many responses and reactions to the tragedy from listeners. By the last hour, people were sharing stories about other St Andrew's nights they had known, and the mood was growing less sombre.

I suppose I've always seen these late night radio shows as the conversations I would have with a bunch of friends if they were all round at my house and I was in charge of the record player. Like any social gathering you respond to circumstances, talk seriously, laugh, cry, fall out and make up. Sometime you even let folk choose the occasional record themselves...

In the end, it's about community, I suppose. We talk, we listen, we love music, we play records. And music, is, of course, eternal.

Thoughtful choices of music, balanced by well-measured comments and some excellent news coverage, broadcast without sensationalisation of the matter. I have no connection to Glasgow, but like many, many people, I feel a sense of solidarity with all of those directly and indirectly involved - and there are times, like you have demonstrated over the weekend, Tom, that music can say so much more than words. Thank you.

Clare said...
This comment has been removed by the author.
5:28 pm

Clare said...
This comment has been removed by the author.
5:30 pm

You all did well, every last one of you. Thank you and I mean that because you stayed focused, calm and peeled out all the work that needed to be done in a very sad situation. Not easy.