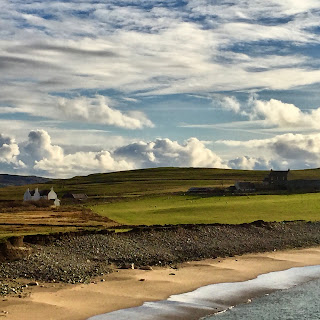 Back live after a week awa' sooth, and back into the battle with Facebook Live. We ARE legal, here at 60 North, or as legal as the antiquated, sheet-music system of music licensing can allow. We have all the licences we can obtain. Get with the programme, guys! I see Facebook are advertising for a 'Global Music Licensing Executive' who will doubtless be negotiating with the likes of Sony and Universal, and be immune to the wishes of tiny wee outfits like 60 North. Just get on with it, Markie.

So, the Facebook stream has been removed, without explanation, and that took all your valuable and much appreciated comments as well. Sorry, but we cannot control the Mighty Zuckerberg and his algorithms.

Thank goodness for Mixcloud, an entity which understands music and how it should work on the web. Here's the link to Saturday's show. A full playlist follows. Back next week for more adventures in visual radio, and hopefully some better weather.

Oh, and as I write, Sunday Teas in Gulberwick Hall this afternoon. Thanks to John Hunter for that information. I should also say that the track which just leaps out at me from the show is the long, soundtrack version of Absolute Beginners, by David Bowie, played off cassette. It's a truly awesome song, and an amazing performance with fabulous piano from Rick Wakeman and one of the all time great saxophone solos by Don Weller.

Other highlights: Kid Canaveral off 45rpm single; James Taylor's still-stunning guitar playing on You Can Close Your Eyes, probably the best solo acoustic accompanist there has ever been. And the news (via Michael Craig) that ALL the late Michael Marra's recordings will be issued digitally, for the first time, in January.

This week's show has more cassettes and vinyl than ever before, including some very rare tunes indeed.

With thanks as ever to Iain Waddell and Bo Anderson (and Andy in Singapore!)

I've posted a link on my fb ...hopefully you'll get a few more visitors here.....