It was 35 years ago...Rough Justice: Songs of Worship and Doubt. The lost Tom Morton cassette 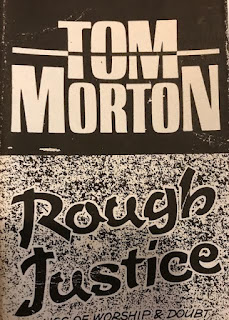 1982. I was a worship leader, on occasion, kind of. A singer and guitar player. A songwriter. An evangelist. I'd been prayed over, blessed, sent forth with the laying on of hands and everything.  I spoke, or at least muttered, in tongues. I was a full-time worker for God, part of a mission team called Scotroc, which sounds now (and sounded then) like a form of cooking chocolate. For a year or so we (Anne, my wife, and Sandy, my son) had been living in a Charismatic community at Overtoun House near Dumbarton. With second son David on the way, we'd moved out, back to Glasgow, but things were moving - personally, spiritually, emotionally - towards utter meltdown.

Faith was falling apart. So was every other aspect of life. But it was happening in the context of having to play, perform, witness, preach and pray in order to live. It was a job. It was what I did. It was who I was. And I was getting to the point where I didn't believe in who I was anymore. 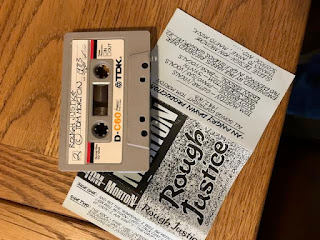 At this point, I'd recorded two previous 'Christian' albums, both released on vinyl, almost all sold at concerts. Now I was trying to write my way through the crisis in my life. The result was this cassette, full of songs which veer schizophrenically from the full-on worship anthems like I Am Empty to desperate, paranoid Costello-lite rants like Loose Talk Costs Lives. There are songs of guilt and depression, and increasingly stark portrayals of a God who seems to delight in inflicting suffering. Pain seems to be the only solution. Contrasted with an immersion in religion both fuzzily reassuring and apocalyptically crushing, bloody and cruel.

Amid all of this, watching my disintegration with no doubt some astonishment and discomfort (I never asked), were some amazing young musicians (and I was only 26). Jane Sidebottom, Ewen Vernal and Andy Brodie. I'm pretty sure Ewen was only 17. All were members of the Scotroc team. Both Andy and Ewen would become highly successful professional players. They have their own stories to tell, and I won't trespass on them here. It was a delight to meet Jane again last year - at an Aberdeen University ceremony. We both had children graduating. 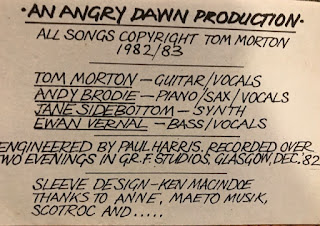 Anyway, I was provoked into rummaging through various nooks and crannies, digging out my only copy of Rough Justice and transferring it into the digital realm, by a mention the other day on Facebook. The Lion Will Return (Narnia in open 'G') is apparently still worthy of inclusion in a sermon. I must admit I do wonder if any of the explicitly worshipful choruses ever surface in churches, or if my cheerfully backslidden state has rendered them unholy.

The tape was recorded over two  December days in 1982, almost exactly, as I say, 35 years ago. In the old Gospel Radio Fellowship two-track studio in Argyle Street, Glasgow, live. What you hear is not of the best quality. The only copy I have is a TDK D60 copy made from a cassette, which wasn't that great to start with. But listen hard and you'll hear some of the best fretless bass playing any Bishopbriggs 17-year-old has ever recorded. Some wonderful sax and piano. And, may I be forgiven, some guitar playing I had forgotten I was ever capable of.

Some of Rough Justice is hard going. Some is well, rough. Some is awful. Some is pretty good, I think.

Anyway. Here it is.

Tom thanks so much for this post Rough Justice came with me when I left home at 16, 4 years after it was published. Some of those songs have been refrains that have sustained and nourished me over many years, the aching simplicity of some of those choruses. On Facebook so was talking to another musician about the difference between what a writer experiences in a song and how listeners reframe lyrics for themselves. Too much emphasis is placed on blind faith when doubting faith is genuine honest and pure. Thank you for the impact this little TDK had on me and thank you for digitizing it.

Thank you David. Means a lot.

Thanks for posting this. Lots resonates with me. Blessings.

I remember Weimar from about the same time. My brother bought it on vinyl when you were performing as half time entertainment at a concert, possibly Bind Us Together? I like this album very much, excellent guitar playing and sensational bass, especially on Loose Talk.

As a long time fan I think it's time for your full autobiography and discography, you've given us snippets over the years in your books, blogs and (much missed) radio shows, but not the full story.

Ah, the temptation is always there. It may yet happen...

Musically, lyrically, great stuff. Thanks Tom for being a 'Brave Boy' in sharing openly and honestly. A time I remember well. I'd love if you considered digitising and sharing the 1983 or was it 84? versions of Park Lane recordings 'Dancing in a Minefield', 'Jump (don't jump') and also the Brave Boys third recorded track, can't remember the title, lost my cassette tape! Tracks that featured a rather expensive Prophet V and some great kit playing by Alec Smith.

Think I have the reel to reel Alan. Will check!

Listening to it brings back memories of a few years ago. Was it really 35 years?
I bought a copy of "Our of the Harbour" recently and need to get it into a format that is playable on the radio.

I still have the lyrics of Dark Glasses you sang with Graeme D in my 55 year old head. Great memories and great song.

Tom, a thrill to see you again in the flesh after talking on FB a few times, celebrating our bairns at Aberdeen. Thankyou for your generous words. I lead Worship regularly at our church and 'When you pass through the waters' makes an appearance occasionally. Fully attributed of course! It was an honour to work with you
and a great grief to witness the pain you were in in 1982. I just wish I had been better able to articulate how much I cared, and how little I could do. 'Don't know how to talk to you, it always comes out wrong. You might say you're my friend today but you won't be that way long. I damage with the things I do, but I really don't mean to hurt you - I'm just trying to reach out to you through the Lifegame.' May your life sail in calmer waters in these later years, old friend. Jane Greenhalgh(Sidebottom)