No Beatcroft Social this week - but a wee tribute, courtesy of those nice people at BBC Radio Orkney, to Malcom Young of AC/DC, who died last week. I thought it would be interesting to examine the strength-in-depth of AC/DC's songwriting, something revealed to me properly when I first heard Mark Kozalek's wonderful What's Next to the Moon? album, featured here. Sometimes these songs sound...elemental, like ancient blues or country. Dark, though. darker than they appear in what can be cartoon versions within the AC/DC performance oeuvre.

Still, when you hear Malcolm's rhythm guitar, that (suitably modified and indeed recreated) ancient, single-pick-up Gretsch Jet, the sheer propulsion that allows Angus to soar and strut...AC/DC were irresistible. And despite it all, despite the deaths, the crimes, the disarray...they still are.

You can play the show on Mixcloud as usual  from the embedded player below, or go to the BBC iPlayer and stream it from there for around a month! 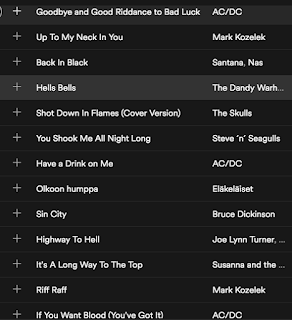