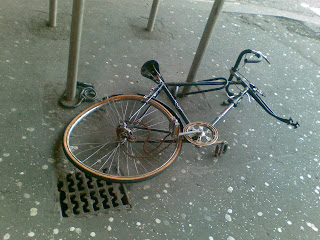 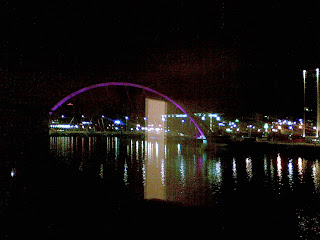 Renting a holiday flat in Glasgow for a week, sight unseen, over the internet, has proved mostly successful - it's comfortable, clean, plenty of room for Martha and Susan (James is, ahem, ski-ing in Italy with the school; beats a week at Abington Army Camp in my young day). But there's no broadband, and despite the proximity of PQ, with its endless digital power, I find the inability to blog, Facebook, check email and generally surf debilitating. Not helped by my having dropped the Nokia in a puddle on the Hillswick Ness, which has left it sporadically, telephonically bilious.
Anyway. Lots of practising for the weekend's two Malt and Barley Revue gigs in Glenfarg and Lathones (near St Andrews). And some cycling. That's the view from the flat, by the way - six months to fix the 'Glasgow Arc' better known as the Squinty Bridge, with taxi drivers (who know all) blaming the use of Chinese steel. The bike isn't mine - it's been locked up and broken at the corner of Buchanan Street and Bath Street for years. How many other lost and busted bicycles are there in our cities, locked up and forgotten, or just abandoned, by owners who may be on the other side of the world, or dead?
Martha's Scottish National Children's Orchestra gig at the Royal Concert Hall was splendid, with the National Youth Jazz Orchestra performing as well...but why do Scottish jazzateers insist on speaking half-American and adopting all the mannerisms of Miles Davises? Mmmmm....nice! And why, as Peter Capaldi memorably said in today's Guardian, can't jazz players just leave those melodies alone?
Posted by Tom Morton at 11:00 am