The Inn at Lathones - the new Bein Inn, but better 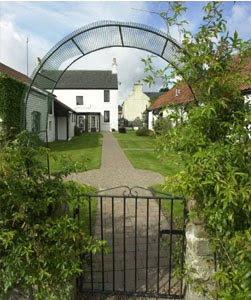 I had the privilege on Sunday to be the first performer at The Stables, part of the Inn at Lathones in Fife (near St Andrews on the Kirkcaldy road). David Mundell, formerly of the Beinn Inn at Glenfarg, is now booking acts for the Inn and he has some great people coming. Have a look at the Mundell Music website.
Many thanks to David, and Pete Alexander for making the Malt and Barley Revue gigs happen so successfully. It was nerve wracking at the Glenfarg Hotel on Saturday night, the first time many of these songs and poems had seen the light of an audience. Especially when wife and daughter were actually IN the audience. But both at Glenfarg and Lathones, the whole thing went down down really well. Thanks to everyone who came, especially those who stayed at the Glenfarg Hotel and had to leave without their breakfast!
David's rock'n'roll memorabilia from the Beinn Inn is gradually being incorporated into the Inn at Lathones, where owner Nick is totally suppportive of the new musical direction. Themed suites (really beautiful) including a Henry McCullough suite and a John Jorgensen room are almost complete. There is talk of a festival. the food's great. I can't wait to return.
Posted by Tom Morton at 12:43 pm