Spring at The Radiocroft, without a campervan 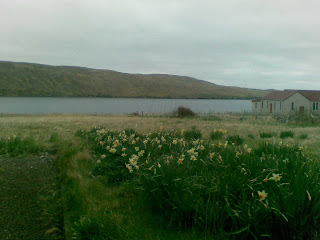 Daffodils are out at The Radiocroft, despite the temperature, which remains Baltic. In fact, the Baltic will be a hell of a lot warmer than it is here. Cycled along today and nearly got frostbite.
Nevertheless, the colours are changing as spring kicks in, and I find to my utter and complete astonishment that my thoughts are turning to boats and camper vans, not necessarily in that order.The decision by the two in-house weans that the line-up for Hydro Connect is -just- cool enough to tempt them, and the fact that Susan should be able to go as well, means that I had a look at The Large Tent, last used, disastrously, at the Cambridge Folk Festival in 2002. And then I stopped looking at it, remembering the way its patented 'easy-pitch' system trapped fingers and caused much bemusement and shouting.
Could I return to the vicissitudes of camper van ownership, though? How many VW Type Twos did we have? I think it was two. Much of that experience is a blank, fortunately. And yet...who can forget the weekend in Applecross with three kids in the pop-top? Then there was the T25...the endless replacement of spark plug cables, the tin-of-WD40-a-day habit. Not to mention the Fiat, in which I slept through an Inverness winter in the car park of the BBC, and the horrendous Talbot, incapable of more than 25 mph in a tailwind. With moss on the inside of the windows.
Weirdly, I have just discovered, in The Bookcroft, a copy of the hippy manual on Beetle and Bus maintenance, John Muir's How to Keep Your Volkswagen Alive - A Manual of Step-by-Step Procedures for the Compleat Idiot. I think it may be a sign. 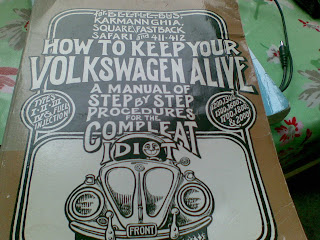