On my bike (again) only this time it's foldable 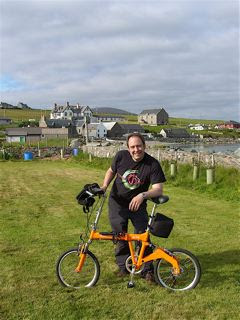 Last summer's 330-mile charity cycle ride for the Shetland CAT scanner appeal seems a distant memory (all that weight piled back on). The scanner has been ordered and the appeal was a success beyond anyone's wildest dreams, so this summer's BBC Radio Scotland Tom"s Tour will be somewhat more relaxed...

I was tempted to use a motorbike for our east coast broadcasting ramble at the end of July, but really wanted to cycle again. However, the distances (can't reveal the exact locations yet, I'm afraid) are too great to allow that. Well, some of them are. So the plan is to go as green as possible and use public transport plus a folding bike. I bought the Downtube IX a few months ago ( designed by the amazing Professor Yan Lyansky) and through bitter experience on the last bike ride, have made a few modifications: new inner tubes ('smart' tubes, containing a green sealant called, ahem, Slime which promises to seal punctures instantly); a new saddle (a Trek gel-filled ultra comfy affair); new folding pedals (the old ones were rubbish); a 'hanger banger' to protect the derailleur when the bike's folded, and tougher skewer nuts. Also a set of miniature LED lights.

I also have lycra cycling gear, but that is not for public consumption.
Posted by Tom Morton at 9:58 pm

hi tom
aye a commfy saddle is a must , gone are the days of oor youth when you could sit for hours on they leather skelfs, jist saw your pic in the wee boat , braw , and you caught breakfast, you've got it made .
tata the noo
colin

Hi Tom - great blog - just wanted to ask which "hanger banger" you got for your DownTube FS bike? I just got the same bike myself, and can see the vulnerability of the d.hanger... Thanks! Stu