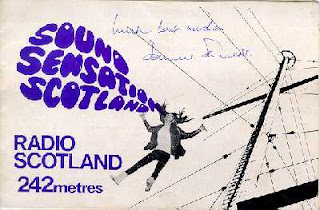 Inveterate TM show listener Hugh Campbell got in touch today to reminisce about the first broadcast from Wunnerful Radio One, exactly 40 years ago....what, he asked, were you doing when Tony Blackburn spun Flowers in the Rain, way back when? On my way to school, I think, gazing out, as we prepared to turn right into Marr College's driveway, at the space once occupied by the good ship Comet, home until a few months previously, of the pirate station Radio Scotland.

I remember the jingle: "Just off the coast, no far frae Troon, there lies a bonnie wee boat/though it's nothin' much tae look at, it's the proudest ship afloat/it's the home o' Radio Scotland and it's every Scotsman's pride...."(can't remember the next bit, but it ended)"Radio Scotland is playing just for you/so beat the ban and join the clan on station 242." Medium Wave, of course.

I've just discovered this fantastic site, from which the picture above is taken, which has all kinds of pictures of the early DJs like Richard Park, Jimmy Mack and Stuart Henry, a history of the ship and snaps of the amazingly primitive studio. Radio Scotland closed before Radio One came on air, as the new Marine Broadcasting Act came into force and made it....even more illegal!
Posted by Tom Morton at 12:25 pm

Just off the coast, no far frae Troon, there lies a bonnie wee boat/

though it's nothin' grand tae look at, it's the proudest ship afloat/

it's the home o' Radio Scotland and it's every Scotsman's pride..

Radio Scotland playing just for you/

That's my recollection of how it went :-)