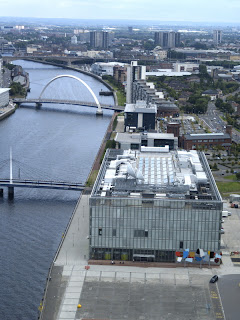 In Glasgow after accompanying Magnus on his first motorised foray onto motorways....and he did well, though my nerves were somewhat shredded at his cavalier attitude towards lane discipline on Dundee's myriad roundabouts. Horrendous delays at the first roundabout coming into Dundee from Aberdeen...and the really odd thing was this: about 75 per cent of the cars queuing on the inside lane were driven by women. There could be various reasons for this: maybe more women commute into Dundee; perhaps women tend to be satisfied with waiting in the inside lane and don't impatiently swerve into the outside to gain some distance; or maybe they read and understood the roadworks sign which clearly stated that the outside lane was closed ahead...

Anyway, I picked up the folding bike at Magnus's flat and zoomed (10 minutes from Maryhill) to Govan and the BBC's new Crystal Palace, which has its official opening bash this week. I won't be there as I have to go to Ullapool for the Loopallu festival. The picture, by the way, was taken by old pal Stewart Cunningham. When you hear the show today, that's where it will be coming from. Or at least, when I speak. The music's still played in from Aberdeen.
Posted by Tom Morton at 1:08 pm