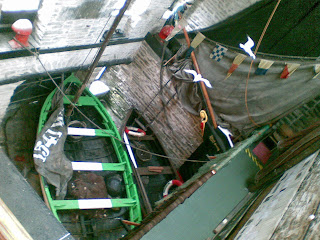 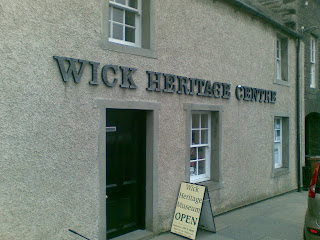 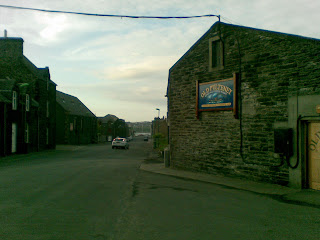 Wick Heritage Centre looks fairly innocuous from the outside, but once you open that plain black door you step into another world. It's virtually an entire terrace of Georgian houses (and outbuildings) and it is, without any doubt at all, the best 'amateur' museum I have ever seen. Run entirely by volunteers, its contents supplied by local people, it explains Wick. And Pulteneytown. Which are different, but the same.
Wick/Pulteneyown (henceforth referred to simply as Wick) is huge, and yet underpopulated and showing the signs of great times long gone. It also possesses some of the best Georgian architecture in the country, courtesy of Sir Thomas Telford and the British Fisheries Society, and all is explained the Heritage Centre. For this was once the greatest herring port in the world, a place so wealthy it attracted producers of luxury goods from a' the airts, and so thirsty there were 45 pubs and 800 gallons of whisky was consumed every week. Six thousand men fishing out of the port, another 6000 men (and women) land-based, and that's in addition to the normal population. This was in the 19th Century.
The heritage centre displays all this in extraordinary fashion. It has boats, nets, sails, an entire smokehouse, a cooperage, a (great big) lighthouse (!) a photography studio, whole houses recreated, some fantastic wartime memorabilia, stationary engines, lawnmowers and documents. I could have spent hours there. In fact, its layout reminded very much of the new Shetland museum, though that is obviously a very professional (and hugely impressive) endeavour. The fact is, though - there's more sheer stuff in the Wick Heritage Centre.
It gave me an insight into the sheer pride in Wick's past and present that fuels many locals. Many of whom I'll meet tonight at the Old Pulteney Prohibition Ball, which takes place at the distillery itself.
Posted by Tom Morton at 11:42 am