To Caithness by sea! 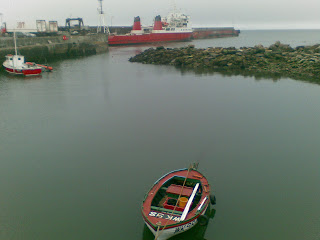 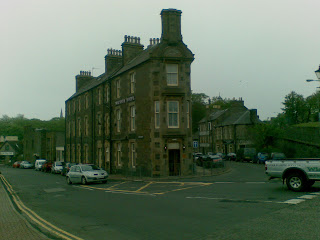 A pretty lumpy crossing from Shetland to Orkney last night, but we arrived at 10.45pm, 15 minutes early. That gave the satnav plenty of time to thread me through Kirkwall and to the Murray Arms at St Margaret's Hope before it shut.
Up early to catch the 8.00am Pentland Ferries 'short sea crossing' to Gill's Bay in Caithness, on the old Claymore. The last time I was on this ferry she was under Calmac colours and plying the Oban to Barra route. Arriving at Castlebay in the gloaming is one of the great Scottish ferry experiences. Arriving at Gill's Bay in the mist was...not quite so romantic.
Anyway, to Wick, where I have just tried the Jane and Judith Glue recommended Bord De l'Eau restaurant (it's a pun. I think). Great omelette. Oh, and that's Ebenezer Place, officially the shortest street in the world (six foot nine inches)!
Posted by Tom Morton at 1:23 pm

And not a single street light!