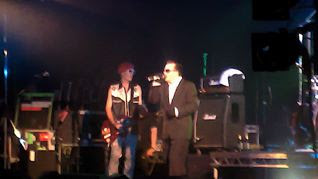 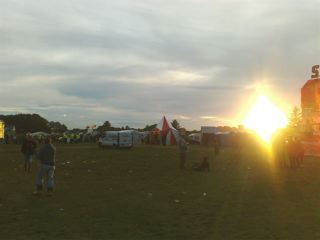 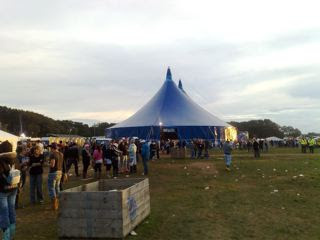 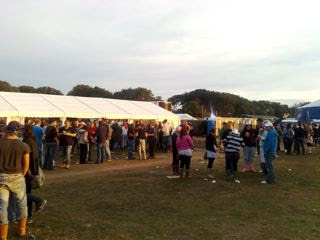 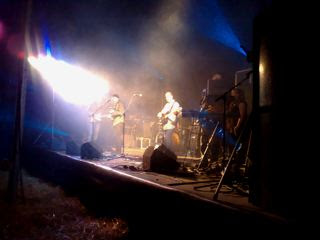 And so a fine time was had by all at the Wizard Festival, Roy and Sam Thain's visionary quest to bring rock'n'roll to the rural heartlands of northern Aberdeenshire.
It's held at New Deer, deep amid some of the finest arable land in Europe, inland from Peterhead. This was my first visit to the area for many years, and I'd forgotten how impressive the huge vistas of field and forest are. It's a bit like Normandy. Only colder. And wetter.

So wet, indeed, that flooding threatened to ruin the party before it even started. Some big names had been booked for this, the festival's second year, including Supergrass, The Damned, Alabama Three, Peatbog Faeries and more. Nearly 6000 tickets had been sold in advance (at a very reasonable £65 for the weekend, including parking and camping - take note, DF Concerts!).

But torrential downpours on Thursday and Friday turned part of the site into a loch. Fears of cancellation were averted when the community spirit which pervades this most couthy of rock fests came into play. Local farmers lent their sileage pumps and soon the site was usable again. And then the rain stopped.

I arrived on Friday evening to m/c bits and pieces - including The Damned, who may just be Dave Vanian and Captain Sensible, these days, plus help, but were a truly magnificent noise-cartoon. Neat Neat Neat, a single which helped redirect my life, was done full-blooded justice. They were fantastic fun. Supergrass (flown in from Aberdeen by helicopter - this is North Sea Tiger country, after all, with choppers ten a penny) ate up the enthusiastic atmosphere and delivered in fine style to a crowd whose good nature matched its capacity to remain steadfast under intense lubrication. I asked a policeman why there had been so little obvious drunkenness and he replied: 'That's just because they're all still standing up.'At no other festival have I seen such stalwart refusals to fall over.

In truth, the down-home vibe was omnipresent, a casual warmth from the organisers matched by a real command of the essentials. Everything worked, the backstage team was cool, calm and very sorted. The aim was to provide something for all the family, and the children's area was seriously impressive, with a proper climbing wall, bucking bronco and lots more fun stuff.

Saturday (after rushing back into Aberdeen to hand over Gloria the camper to Michael from Orkney, eBay winner of her dubious charms) was a fine day of weather, and the audience was commensurately bigger and in even higher spirits. I did a wee acoustic set at the Banshee Tent, which went well, and I saw some great lesser known bands - including Eskimo Blonde from Aberdeen and the astonishing Toy, whose in-your face attitude was matched by some truly excellent material and an impressively bolshie vocalist. They were like PIL crossed with Elbow. They all looked about 16.

There was superb Cullen Skink available, though maybe there could have been more local produce, and there was unhappiness about the noise from the fairground rides, which were far too close to the Freedom Stage. John McCusker, who was playing (on Friday) with Roddy Woomble, Kris Drever and the delectable Heidi Talbot, looked particularly pissed off with the waltzer.

MacFloyd (pictured) were a revelation. Note-perfect renditions of Pink Floyd's greatest anthems were deliriously received by a capacity crowd, many of whom were far too young to know the Floyd's original releases. My jaw was well a truly drappit. The Peatbog Faeries went down brilliantly too, with their progressive-bagpipe-fiddle-brass amalgam, and the A3, of course, shook Aberdeenshire to its very roots.

My thanks to all concerned, especially press officer Angela and John at the Voodoo Stage, and to the Beggs in Stuartfield for looking after me so well. I have never even seen a breakfast of those dimensions before!

The good news is that the festival broke even and will return next year. It's a real family and community effort, welcomed, it seems, by everyone in the area, a major boost to the economy and a lesson for the big commercial promoters to the south:like Belladrum, Wizard is a festival for the festival's sake, not the money, not for the sake of any one particular band or group of fans. It's for everyone. There was no trouble and, interestingly, less litter than at any other festival I've been to. They're neat up north. Neat neat neat...
Posted by Tom Morton at 10:30 pm

The continuing misadventures of Gloria the campervan. Got safely back to Orkney. Did a shakedown run of 100 miles before venturing down the West Coast last week. Both front doors won't now open from the outside so entrance is via sliding door or back doors. Hefted out the tv, portaloo and the cupboard behind the front passenger seat, to reduce weith but also to keep things simple. Economy is a bit tear ducted stimulating and wallet shredding. Driver's side wiper stopped working, but was just a loose nut. Phew. Then on Thursday it refused to start while parked at Loch Assynt. The AA man fixed the wiring and said "Better head back to Orkney and get that wiring sorted sonny. It's a mess." Then the exhaust started rattling. Headed back north and spent a delightful 3 days at Bettyhill. Am back in Orkney and a mechanic is going to mull over the wiring. I need the van to head to Loopallu next week. Verdict? Despite the (nervous) breakdown I had a great time. The old van is alright, and I'm looking forward to Loopallu? Regrets? None yet. Hope your VW does the job you. All the best.